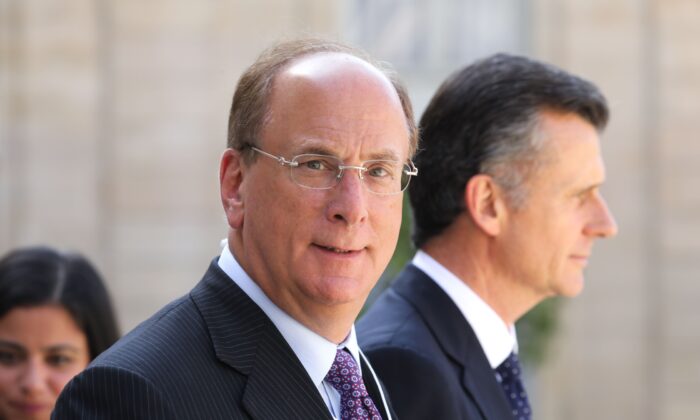 BlackRock, the world’s largest investment manager that oversees $10 trillion in client funds, has positioned itself as a socially conscious firm. However, the company is choosing China over the United States as it advances its environmental and social priorities, according to Will Hild, executive director of Washington-based nonprofit Consumers’ Research.

Hild said BlackRock CEO Larry Fink is “selling out the interests of American consumers and American companies in the United States, in return for personal favors for BlackRock in mainland China,” during a recent interview with EpochTV’s “China Insider.”

BlackRock and ESG Controlling America but Benefiting China—With Will Hild

However, according to Hild, ESG “is an excuse for Wall Street to push politics into corporate America.” In other words, Wall Street is pushing ESG policies that “could never be achieved at the ballot box.”

BlackRock has also taken up the position of supporting a net-zero emission future. The company’s website tells its clients that “climate transition creates a historic investment opportunity.” In a 2020 letter to CEOs, Fink wrote that “climate risk is investment risk.”

While BlackRock has pushed U.S. companies such as ExxonMobil to embrace green energy, it hasn’t taken the same approach with Chinese firms, according to Hild.

“Ironically, Blackrock controls about the same amount of shares, about  7 1/2 percent, of PetroChina as they do Exxon, but they don’t engage in any of the same behavior when it comes to that company,” he said. ”I think if they did, Larry Fink would find himself not welcomed in mainland China very quickly because we know how that government acts.”

Hild said BlackRock’s excuse for not pushing Chinese firms is “so absurd.”

“The excuse that they use is that China is still a developing economy, and so we cannot force the same rules on them,” he said.

In 2021, BlackRock sided with hedge fund firm Engine No.1, which replaced new directors on ExxonMobil’s board, believing that the oil giant had responded too weakly to the climate crisis. Citing a Wall Street Journal report, Hild said the board subsequently considered divesting itself from two gas and oil projects in Mozambique and Vietnam.

Hild said the projects would have “served American consumers at the pump so that prices could have been brought down.”

“Effectively BlackRock and Larry Fink are using America as China’s carbon offset. They are not putting pressure on China to decarbonize,” he said. “And so they are putting up corporate America on an unlevel playing field here in the United States, against their rivals in China. And they’re using American investment dollars to do that.”

One favor BlackRock received from the Chinese regime was being granted the right to start the first wholly foreign-owned mutual fund business in China, according to Hild.

Many state governments in the United States have invested their pension funds with BlackRock. According to a 2021 report (pdf) from Consumers’ Research, Washington, Florida, and New York were the top three investors, investing $13.8 billion, $10.7 billion, and $9.8 billion, respectively,

The report also warns about BlackRock putting investors’ money in Chinese companies with ties to the Chinese military, such as China’s biggest chipmaker, SMIC.

Representatives for BlackRock didn’t respond to a request for comment by press time.