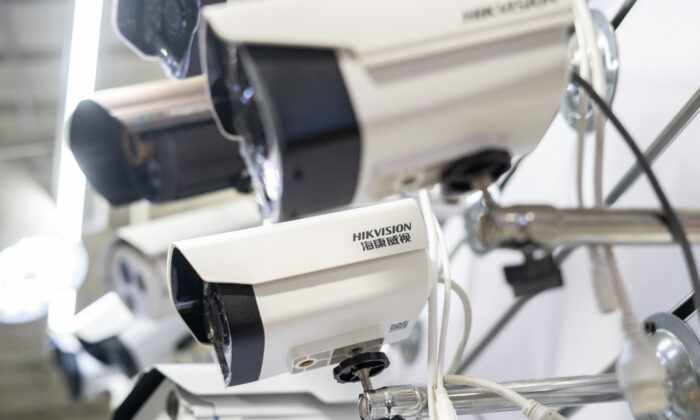 Hikvision cameras in an electronics mall in Beijing on May 24, 2019. (Fred Dufour/AFP via Getty Images)
US-China Relations

The two companies are Hikvision and Dahua Technology, and their recent business deals with U.S. local governments were reviewed by IPVM, a Pennsylvania-based video surveillance research firm, based on government contracts obtained through GovSpend, a technology company based in Florida. On May 24, IPVM published its findings in partnership with TechCrunch.

Buying equipment and services from Hikvision and Dahua is an issue due to cybersecurity and human rights concerns associated with the two tech companies. In fact, federal agencies are prohibited from buying from the two companies because of significant national security risks outlined under the National Defense Authorization Act (NDAA) of 2019. The prohibition went into effect in August 2019.

Hikvision and Dahua were also among a group of China-based companies added to the U.S. Commerce Department’s blacklist in October 2019 over their roles in supporting the Chinese Communist Party’s human rights abuses in the far-western Xinjiang region. U.S. companies are required to apply for a special government license before they can do business with blacklisted companies.

The Chinese regime’s crackdown on ethnic and religious minorities in Xinjiang—subjecting them to abuses that include torture, sterilizations, political indoctrination, and forced labor—has been denounced as “genocide” by Canada, the Netherlands, the UK, and the United States.

Read More
Uyghur Groups Frustrated by US Inaction Against Genocide

Most recently in March, the Federal Communications Commission (FCC) designated Hikvision and Dahua as companies posing a threat to U.S. national security. Three other Chinese companies receiving the same designation were Huawei, ZTE, and Hytera Communications.

Despite the NDAA ban and federal warnings, Hikvision and Dahua have continued to make inroads into the U.S. market at the state and local levels. Regional governments are only prohibited to use federal funds to buy from the two companies.

According to IPVM, one of the biggest spenders was the Baldwin County school district in Alabama, which spent over $1 million to buy 144 Hikvision thermal cameras from a local supplier in July 2020. These cameras were to be installed at 48 local schools to screen people for fever.

In August last year, the Fayette County Public Schools in Georgia paid $494,000 for 70 thermal cameras. The following month, the school district confirmed to IPVM that all purchased cameras were operational at all of its schools.

TechCrunch reported that Kern County in California was the only municipality that responded to the outlet’s question about Hikvision and its alleged connections to human rights abuses. Ryan Alsop, chief administrative officer for Kern County, told TechCrunch that he was “not familiar at all with the issues you’re referencing with regard to Hikvision.”

According to IPVM, Kern County spent more than $15,400 in June 2020 on surveillance dome cameras and related equipment for its probation department offices.

Modesto City Schools, a public school district in California, spent $256,500 on eight Dahua cameras and equipment in October 2020, according to IPVM. Additionally, the city government in Modesto spent an undisclosed amount to outfit 55 buses with thermal scanners from Hikvision.

The city of Modesto initially used federal funds to make its Hikvision purchase, unaware that doing so violated NDAA prohibitions, according to IPVM. The city later told IPVM that they “processed to move the expenses to an alternate funding source.”

Sen. Mark Warner (D-Va.), chairman of the Senate Intelligence Committee, told TechCrunch that Chinese companies are never “truly independent” from the CCP, in response to the IPVM findings.

“So, when these American entities buy this equipment, they should know that not only are they supporting companies facilitating repression in China, but that the data gathered via this surveillance gear can be shared with the Chinese Communist Party,” Warner stated.

“Americans should also be concerned about how the CCP is working to collect data of U.S. citizens through a variety of tactics. We need to educate Americans, including local government entities, on the risks of buying this type of equipment and its moral and security implications.”