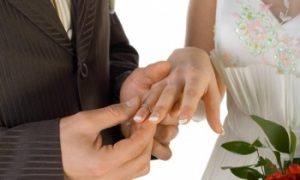 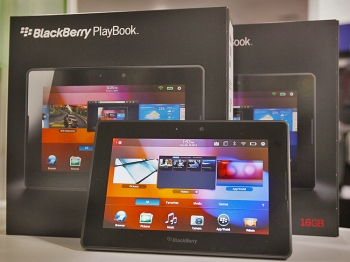 Blackberry Playbook tablets are offered for sale at a Best Buy store on April 19, in Chicago, Illinois. The tablets, made by Research In Motion, went on sale Tuesday in the United States and Canada. (Scott Olson/Getty Images)
News

By Yi Yang
Print
RIM released its first tablet, the Blackberry Playbook, on Tuesday. The Playbook is available at many large retailers such as Best Buy and Office Depot.

No lineups have occurred since the release, but some stores have already sold out of the new gadget, according to Wired.com. Although the release is less dramatic than that of the iPad 2, where customers formed long lines in front of Apple stores, the Playbook is more widely distributed than the iPad.

The Playbook has received mixed reviews, with some pointing out its relatively smaller size for the price, which is the same as the iPad, and limited number of apps. Better reviews praised its good general performance and web browsing experience.

Prior to its release, the Playbook received mostly pan reviews such as being “half-baked” and missing important features such as 3G and email. In response to the widespread negativity, RIM CEO Jim Balsillie expressed his confidence in the new device at the celebration party for the release of the Playbook.

"It's going to be a newsy summer for us and a very newsy BlackBerry World in a few weeks,” he said, according to TopNews.net. “Let’s just say I like what we've got.”

Balsillie also said that the Blackberry Playbook will be getting native email very soon.

“We will have if you want, a standalone, non-Web, non-paired email client on it within I believe the next 60 days,” he told The Wall Street Journal.

The 7” tablet comes in three models 16GB, 32GB, and 64GB, priced at $499, $599 and $699, respectively. It supports Adobe Flash and has front and back cameras. Although currently only available in Wi-Fi, RIM plans on offering 3G and 4G models in the near future, according to Engadget.com.