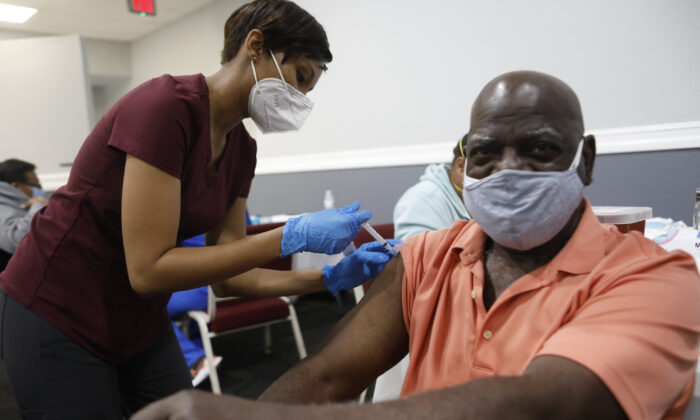 Bible-Based Fellowship Church partnered with the Pasco County Health Department, and Army National Guard to assist residents who are 65 and older to administer the Moderna Covid-19 vaccine in Tampa, Fla., on Feb. 13, 2021. (Octavio Jones/Getty Images)
Viewpoints

Whenever President Joe Biden scolds vaccine holdouts, calling them stupid and even murderous, he curiously leaves out the one demographic group that data from his own health agencies show is the least likely to be inoculated, yet most vulnerable to COVID-19: African Americans.

He hypocritically singles out Republicans for rebuke, but not his most loyal Democratic constituency, all the while claiming his pandemic policies are based purely on science and not politics.

Of course, Biden is giving unvaxxed blacks a pass because he and Democrats can’t afford to lose their reliable vote. Polls show blacks are already turning on them, due in large part to Biden’s vax mandates. Many don’t want to be jabbed and they don’t like Biden’s edicts. The undeclared war brewing between Biden and black refuseniks could affect next year’s congressional elections and even the 2024 presidential race.

Since Biden announced plans on Sept. 9 to compel large employers to vaccinate workers, Biden’s net approval rating among black voters has dropped a stunning 12 points, driven by a 17-point plunge in support from unvaccinated blacks, according to a new Morning Consult poll.

If the trend holds, it could augur a shocking reversal of fortune for Biden. During the Democratic primaries, black voters erected a firewall for Biden in South Carolina, saving his otherwise scorched candidacy. Then they pushed him over the top against President Donald Trump last November.

“The only folks that helped me more than black men are black women,” Biden recently boasted on CNN.

But low black turnout next November could make Biden a lame duck by sinking Democrats’ hopes of holding onto Congress.

Biden’s thread-the-needle strategy is backfiring on both political and medical grounds.

He thought he could just demonize anti-vax Republicans, particularly in red states such as Florida and Texas where his 2024 GOP challengers are likely to emerge, while glossing over vaccine resistance from black Democrats. But the more he pushes the drug on workers, the more he pushes away his Democratic base.

The worst thing Biden can do to get blacks to roll up their sleeves is to push third shots and regular booster vaccinations. Surveys show a key reason why blacks don’t want to get vaccinated is they are afraid of needles. They wonder why they should get vaxxed if they have to keep getting shots. They also know the extra boosters prove the vaccines aren’t working as advertised.

At the same time, the less Biden singles out black refuseniks, the less likely his vaccination campaign will be successful and the less likely the nation’s most vulnerable population will be protected. Black Americans are dying from COVID at disproportionate rates, while resisting vaccination at disproportionate rates. But the president can’t point this out without offending a key voting bloc for his party. So he stays silent as more blacks die. If he really wanted to save them, he’d shame them like he’s shaming everybody else who’s hostile to the shots.

Most offensive is Biden’s scapegoating of Republicans to hide the real problem. He and his media surrogates have intoned that the Delta wave has swept mainly through the GOP-dominated south where vax resistance is highest. Message: Blame those rednecks in Trump Country for the COVID resurgence—they’re the reason Biden’s failed to deliver on his campaign promise to eradicate the scourge and prematurely declared “independence” from the coronavirus on July 4.

Biden knows better. His administration has data showing the states with the lowest vax rates also have the largest black populations, including Mississippi, Louisiana, Alabama, and Georgia. And Centers for Disease Control and Prevention (CDC) data show the COVID hotspots within southern states such as Florida are predominantly black counties. Blacks in Florida, for example, trail whites in vaccination rates by 23 points.

In Biden’s own backyard, the nation’s capital, only 44 percent of blacks are vaccinated, according to the CDC. Blacks in D.C. account for 56 percent of all COVID cases and a whopping 71 percent of deaths, yet they are 46 percent of the population.

A recent Kaiser Family Foundation study found that the black gap in vax rates is so large that it’s “leaving them at increased risk, which may lead to widening disparities going forward and limit the nation’s recovery.”

The unreported truth is that unvaxxed blacks are having an outsized impact on the medical system, accounting for a disproportionately high share of Delta victims filling hospital beds. But shhh! Biden can’t say that, lest he alienate his base.

If there’s a group Biden needs to call out, it’s blacks. Of course, he won’t call out blacks among the supposedly “selfish” unvaccinated who, as he recently scolded, overrun “emergency rooms and intensive care units, leaving no room for someone with a heart attack or a cancer operation.”

If the unvaxxed are such a threat, why isn’t Biden mau-mauing black Americans? Politics.

Even the liberal Brookings Institution points out in a new study that black workers are almost five times more likely than white workers to be hesitant about getting vaccinated. The Democratic think tank argues “addressing vaccine hesitancy, especially for black men, should be a high priority” for the Biden administration.