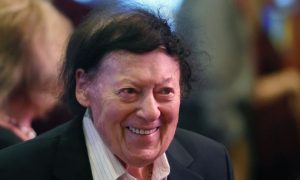 The Department of Justice (DOJ) filed new charges against reported Black Lives Matter activist John Sullivan for his role in the Jan. 6 Capitol breach, saying that Sullivan allegedly told others later that he brought along a megaphone to incite riots inside the building.

After leaving the Capitol on Jan. 6, Sullivan was seen, according to federal prosecutors, telling a witness that he “brought my megaphone to instigate [expletive]” and wanted to “make these Trump supporters [expletive] all this [expletive] up” inside the Capitol building.

Sullivan, they said, also portrayed himself as a journalist who was documenting the incident. However, they said that he was actively participating in the breach—and even apparently broke a window.

Sullivan allegedly cheered after he and others entered the Capitol: “There are so many people. Let’s go. This [expletive] is ours! [Expletive] yeah,” according to DOJ documents.

He also said in the Capitol: “We accomplished this [expletive]. We did this together. [Expletive] yeah! We are all a part of this history,” and “Let’s burn this [expletive] down,” according to the court papers. Federal prosecutors alleged that he attempted to incite others to burn the Capitol down several times.

Appearing to reference his participation in Black Lives Matter events, at one point on Jan. 6, he also was allegedly heard saying, “I am ready, bro. I’ve been to too many riots. I’ve been in so many riots,” the documents said.

And at one point, Sullivan allegedly told Capitol Police officers in the building to “stand down,” prosecutors said.

“There are too many people, you gotta stand down, the people out there that tried to do that [expletive], they got hurt, I saw it, I’m caring about you,” he allegedly said.

“Hey guys, I have a knife,” Sullivan also said, according to federal prosecutors. “I have a knife. Let me up.”

Sullivan, notably, recorded a video of the confrontation between protesters and police near the House chamber that included the fatal Capitol Police-involved shooting of Air Force veteran Ashli Babbitt and, according to the court filings, boasted to a witness that “my footage is worth like a million of dollars, millions of dollars.”

As a result, the DOJ last week said it had seized about $90,000 from Sullivan after he sold the footage to several unnamed news outlets.

Sullivan’s lawyer declined to comment on May 23 to The Epoch Times.

According to reports, Sullivan was involved in organizing Black Lives Matter demonstrations in Utah. He was also charged last July with alleged rioting, threatening violence, and criminal mischief for his part in a demonstration and riot that led to the shooting of a motorist.

“As a protest organizer, John Sullivan is heard talking about seeing the shooting, looking at the gun, and seeing smoke coming from it. John did not condemn the attempted murder nor attempt to stop it nor aide in its investigation by police,” police said in an affidavit last year.

Sullivan, who used the name “Jayden X” online—apparently in reference to Malcolm X—frequently posted on Twitter his support for Black Lives Matter and armed revolution. Black Lives Matter groups in Utah disavowed him in January, describing Sullivan as a “loose cannon.”

His lawyers balked at the asset seizure and asked a judge to have the federal government return his money.

“At the outset, defendant notes that he needs the funds in the seized bank account in order to pay his rent and household necessities,” his lawyers wrote. “Additionally, the proceeds of the seized bank account are not the product of criminal activity alleged in the indictment. Defendant is being deprived of his needed asserts is in violation of the Due Process Clause of the United States Constitution.”

To date, federal prosecutors have charged more than 400 people in connection to the Jan. 6 Capitol breach. House Democrats and a small number of Republicans are also pushing for a Congress-backed 9/11-style commission to investigate the matter.

Sullivan was arrested by the DOJ on Jan. 14 in Utah and charged with being on restricted grounds without authority, violent entry and disorderly conduct, and interfering with law enforcement. He was released conditionally without bail.