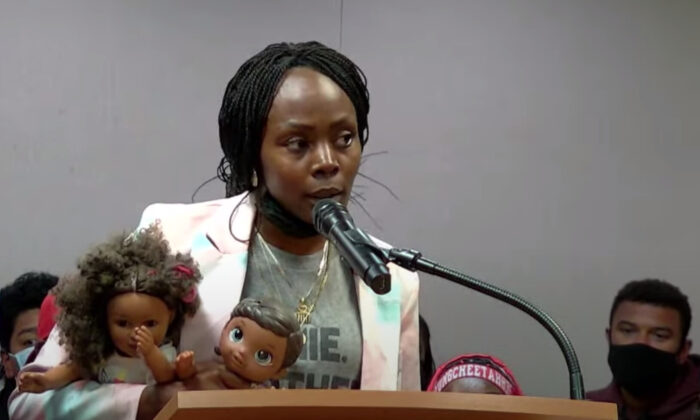 Tamisha Smith, a teacher at Alisal High School, speaks at a school board meeting in Salinas, Calif., on Aug. 24, 2021. (Screenshot via YouTube/SUHSD Official)
Southern California

Students and parents packed a recent school board meeting in Salinas, Calif., alleging “white supremacy” over photographs of a black baby doll posted on an Instagram account and demanding “restorative justice.”

The images showed the doll being run over by a vehicle and posed in front of an ambulance. The doll was called Shaniqua in the post and had its eyes crossed out, with a bandana around its neck and what appeared to represent an ankle bracelet. The photos were allegedly posted by students who attend Salinas High School.

More than 40 students and parents addressed the Salinas Union High School District (SUHSD) board on Aug. 24 demanding answers and swift justice for what many called a hate crime. Some suggested the students involved should be expelled or banned from activities and that letters be sent to any colleges they may apply to in the future.

The district initially posted a statement on its website notifying the public that it had initiated “a full investigation” into the incident “which will include identifying those who were directly involved.” However, the district later stated on Facebook that the California Ed Code prevented it from revealing the specifics of the disciplinary action handed to these students, as well as the names of those disciplined.

Three students have been suspended, according to KSBW 8 Action News. Two of the students are Hispanic and one is black. Another student, who is white, was removed from the cheerleading team for posing with the doll, according to the report.

SUHSD Superintendent Dan Burns has not responded to inquiries about the incident.

“For students who instigated this incident by bringing a doll to class, and those responsible for creating racist Instagram sites, they face consequences in our district that include but are not limited to suspension from school, removal from extracurricular activities, which include athletics,” Burns said at the meeting.

“More importantly, because we are a learning institution, they will be required to have mandatory attendance in restorative justice and healing sessions.”

SUHSD President Phillip Tabera read a formal apology from the board to the African American community for the “anti-black racist incident involving students from Salinas High School.” He said the students’ actions were “highly insensitive, appalling, and unacceptable.”

“The board is gravely concerned and wants the community to know that we are united in condemning this reprehensible behavior. As a board, we have condemned racism and discrimination and we have pledged our support for creating inclusive learning environments on our campuses. Yet, this is a reminder that we have to expect more from our staff, our students and community in order to truly succeed in having more inclusive schools that are free of racism in any form,” Tabera said.

Several students who are members of a Black Girl Magic Club founded by a teacher, Jordana Henry, addressed the school at the meeting. Henry has been a teacher in the district for 12 years, and she said she started the club two years ago “kind of for this purpose.”

“I got the question a lot: Why are you starting a Black Girl Magic Club? Like, why is something like that needed? And, it’s actually for incidents like this, that have now been made public to you,” she told the board. She said the girls in the club have experienced racism “long before this incident.”

“We’ve been speaking out about this for a very long time and been ignored. These problems have been minimized and swept under the rug, and now we’re taking the rug,” she said, as the crowd cheered.

“I don’t want this to be minimized as just a joke, or silly. This is white supremacy,” Henry said. “And when I say white supremacy, I mean a mindset, OK? I’m not talking about … the Ku Klux Klan.”

Henry said those who “argue against CRT (critical race theory) and ethnic studies” in the district don’t understand the “historical context” behind these kinds of incidents. She questioned how opponents of CRT expect students to learn about “white supremacy and avoiding the actions of the past.”

“I had to teach my kids today about Ruby Bridges, and the doll that was in a coffin outside the school when those people had the same smirk on their face as these students,” Henry said.

Bridges was a 6-year-old black girl who made headlines in 1960 when she became the first black student to integrate to an all-white school in New Orleans, when segregation was abolished.

“Ruby and her mother were escorted by four federal marshals to the school every day that year. She walked past crowds screaming vicious slurs at her. Undeterred, she later said she only became frightened when she saw a woman holding a black baby doll in a coffin,” according to the National Women’s History Museum.

State legislators have proposed Assembly Bill 101 (AB 101), which would make the Ethnic Studies Modified Curriculum (ESMC) a graduation requirement for all high schools students. The bill has passed the State Assembly and has been sent to the Senate.

Kali Fontanilla, a teacher who quit her job in SUHSD and moved to Florida after exposing CRT content in the school curriculum, told The Epoch Times that ethnic studies won’t end racism; it will make it worse.

Fontanilla said she’s “not surprised” something like the black doll incident happened in her old district.

“They tried to blame it on white supremacy, but it wasn’t white kids doing it. It was mainly Mexican kids,” Fontanilla said. “So, it’s just really sad to me that the district is trying to use it as an excuse to push more ethnic studies and CRT.”

She suggested the incident foreshadows what could lie ahead for the state if students are forced to learn CRT in the classroom.

Although the SUHSD ethnic studies isn’t considered an official California Department of Education pilot program, according to a recent statement from Supt. Burns, it acts like one, Fontanilla said.

“That class is not going to solve racism,” she said. “Obviously, if that district is the poster child for CRT, then it’s failing.”

Ethnic Studies and leftwing propaganda woven into the fabric of other classes and homeroom sessions is changing the way kids think and view each other—and not for the better, she said.

“Teenagers have a rebellious nature, and I’m not surprised that this happened in our district because they’re being so pushy with it,” Fontanilla said. “They’re pushing blackness on a school of predominantly Mexicans. We spent more time in our lessons on black history, Black Lives Matter, black activism, black activists than they did on anything about their own heritage.”

“During Women’s History Month, there was a video they got about powerful women, and it basically showed them every Democrat woman that there is in this country as examples of powerful leadership women, and not a single woman on the right or who isn’t a Democrat leftist,” Fontanilla said.

“I firmly believe that this incident that happened is an act of rebellion. I was in the district for five years and nothing like this happened five years ago—nothing. I just think these teens are over it. They’re really over it.”

SUHSD approved ethnic studies as an elective course three years ago after five years of research and development but made it mandatory for ninth grade students for the last school year.

“They required all of their ninth graders to take this class. They actually cut the health classes that were a year long … in half and gave half the year to ethnic studies,” she said.

Most of the students and parents as well as teachers and coaches at the Aug. 24 meeting, said the doll incident is as an example of why CRT and ethnic studies should be taught in California schools, and some leveled accusations against parents opposed to it.

Kelly Schenkoske, one of the CRT opponents who attended the meeting, told The Epoch Times that no matter what happened or what the outcome of the investigation might be, she doesn’t believe the incident should be used “for leverage to promote Marxist ideology” such as CRT.

She urged the school board and the community to exercise prudence and avoid jumping to conclusions until a full investigation is completed.

Schenkoske believes the ethnic studies program will cause even more racial division.

“I don’t think there should be political indoctrination in the class. This school district is failing our students when it comes to the core subjects of mathematics, science, English language arts, and history. They’re falling behind because, unfortunately, there are some teachers who have decided that: ‘Teaching is completely political in all aspects and realms.'”

Schenkoske quoted teacher Jeren Penalosa, who made the comment in a California Teachers Association (CTA) “Takeover Tuesdays for Racial & Social Justice” Zoom class called “What is the Impact of Ethnic Studies on Students?” A video of the class is posted on the CTA’s YouTube channel.

“The purpose of this class [ethnic studies], why it was created, was to eliminate racism and other forms of oppression,” said Penalosa in the video. “And so we cannot just be neutral in the face of injustice, because … we’re choosing the side of the oppressor.”

At SUHSD’s June 22 meeting, Schenkoske asked the board, “Since when did public education become a political activist organization?”

Schenkoske says CRT is “neo-Marxism” and has no place in American classrooms.

While Karl Marx focused on class struggles between the “bourgeois” and the “proletariat,” CRT focuses on the struggle between white “oppressors” and “oppressed” other races.

CRT has gained traction among left-wing activists and academia, but many conservatives, Christians, parents, and intellectuals have increasingly spoken out against it. Many opponents argue CRT in the classroom will further divide American communities along racial and political lines, and several states have banned CRT in public schools.