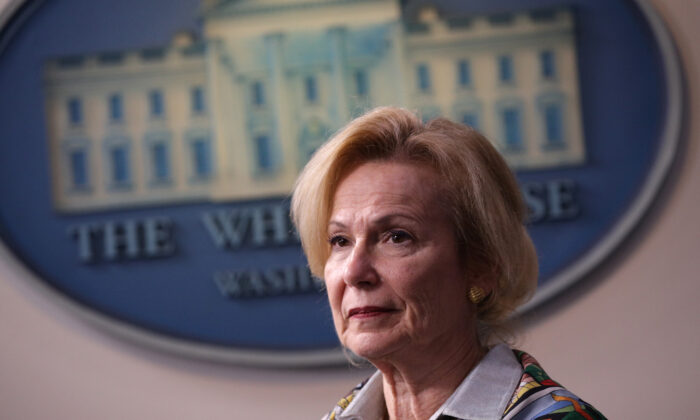 One of the former U.S. officials who led the COVID-19 response during the Trump administration said July 22 that COVID-19 vaccines were not expected to protect against infection.

“I knew these vaccines were not going to protect against infection. And I think we overplayed the vaccines. And it made people then worry that it’s not going to protect against severe disease and hospitalization,” Deborah Birx, the White House COVID-19 response coordinator under former President Donald Trump, said during an appearance on Fox News.

The Moderna and Pfizer COVID-19 vaccines were granted emergency use authorization in late 2020 to prevent symptomatic COVID-19, and were promoted by many health officials, including Birx.

“This is one of the most highly-effective vaccines we have in our infectious disease arsenal. And so that’s why I’m very enthusiastic about the vaccine,” Birx said on an ABC podcast at the time.

She made no mention of concerns the vaccines might not protect against infection.

Data shows the vaccines did prevent infection from early strains of the CCP (Chinese Communist Party) virus, which causes COVID-19, but that the protection waned over time. The vaccines have proven increasingly unable to shield even shortly after administration, and provide little protection against the Omicron virus variant and its subvariants.

The vaccines continue to protect against severe disease and hospitalization, Birx said on Friday. “But let’s be very clear—50 percent of the people who died from the Omicron surge were older, vaccinated,” she said.

“So, that’s why I’m saying, even if you’re vaccinated and boosted if you’re unvaccinated, right now, the key is testing and Paxlovid,” she added.

Paxlovid is a COVID-19 pill produced by Pfizer that has had uneven results in clinical trials and studies, but is recommended by U.S. health authorities for both unvaccinated and vaccinated COVID-19 patients to prevent progression to severe disease.

President Joe Biden, who tested positive this week, was prescribed Paxlovid by his doctor.

There are signs the protection from vaccines against severe illness is also dropping quickly as new strains emerge.

That protection was just 51 percent against emergency department or urgent care visits, and dropped to just 12 percent after five months, according to a recent study. Against hospitalization, protection went from 57 percent to 24 percent. A booster increased protection but the shielding quickly dropped to substandard levels.

Dr. Anthony Fauci also helped lead the U.S. pandemic response along with Birx and once said that vaccinated people would not get infected.

“What was true two years ago, a year and a half ago, changes because the original ancestral strain did not at all have the transmission capability that we’re dealing with with the omicron sublineages, particularly BA. 5. So the vaccine does protect some people, not 95 percent, from getting infected, from getting symptoms, and getting severe disease. It does a much better job at protecting a high percentage of people from progressing from severe disease,” Fauci said on Fox.

He said that vaccines with updated compilations, which are expected to debut in the fall, are necessary.