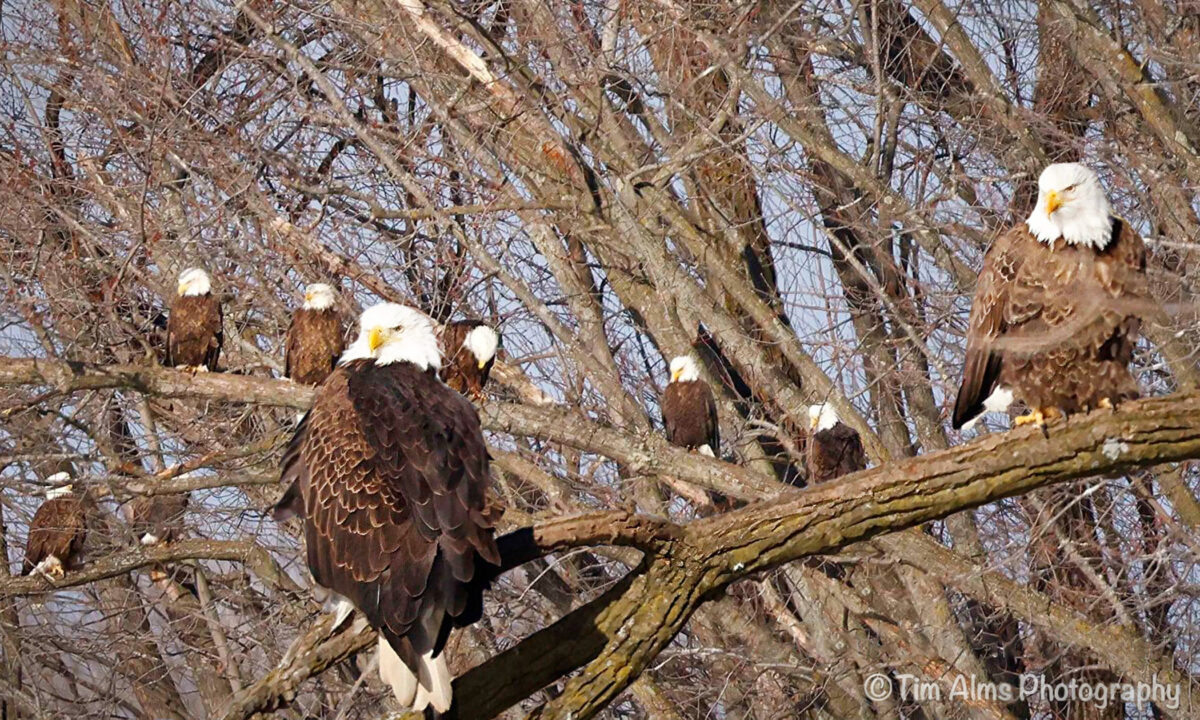 It used to be a big deal to spot just one bald eagle—let alone a whole flock of them all perched in the same tree. A few years ago, America’s national bird had dwindled to far fewer numbers.

Yet one photographer in Red Wing, Minnesota, last month snapped a sight for sore eyes: literally dozens of bald eagles all perched in trees on the shoreside along the Mississippi River.

The awe-inspiring eagles gather here at Covill Park during the winter months, as this portion of the river, unlike other parts of the Mississippi this far north, doesn’t freeze over as temperatures drop. Due to recycled water dumped from a nearby power plant, the river keeps flowing year-round, which attracts the grandiose bald eagles here to hunt for fish.

“The number of them sitting in one tree, I think a lot of people had never seen that before,” Alms told Fox News.

Alms, owner of Tim Alms Photography, also captured magnificent shots of the bald eagles hunting with unmatched precision—swooping down to the river to snatch lunch, snapping up and carrying away fish in their razor-sharp talons, and feasting in perches along the river valley—and he shared his images with The Epoch Times.

As the weather warms up, the eagles will migrate north to nest for the spring, according to local eagle conservationist Ed Hahn, from the National Eagle Center in nearby Wabasha. In the next few weeks, the convocation will disperse until next season.

“The only reason they’re gathering together is because it’s like going to the good buffet in town,” said Hahn. “We are at the very last hurrah of the season.”

Catching sight of such an aerie of raptors in one spot is a new thing in North America, he said, particularly since the majestic bird was for a long time on the endangered species list.

“That’s really the legacy of the bald eagle right now is that yes, we came very close to losing it, but we didn’t,” Hahn added. “Today they’re thriving and we need to apply those lessons to other animals that need our help. The bald eagle is the biggest success story we have as far as wildlife conservation, certainly in North America.”

Having witnessed such a spectacle of bald eagles, birders and photographers like Alms will have to wait till next winter for their majestic feathered friends to flutter back for their seasonal feast along the Mississippi in Red Wing.