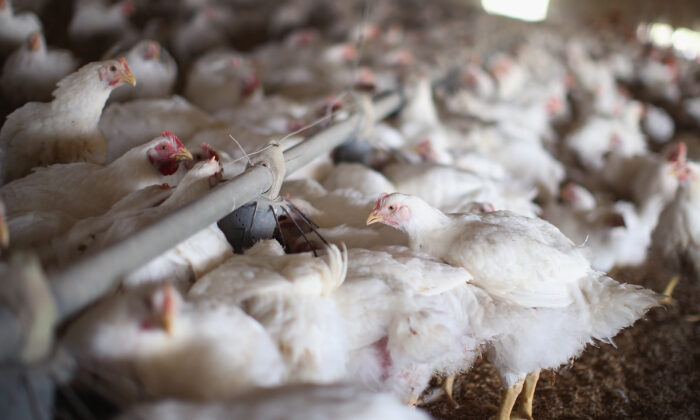 Chickens gather around a feeder at a farm in a file photo. (Scott Olson/Getty Images)
Regional News

Authorities with the U.S. Department of Agriculture (USDA) said bird influenza has now been detected in flocks of birds in Kentucky and Virginia, just days after the officials said that thousands of birds were sickened with the flu in Indiana.

According to the agency, bird flu was found in Fauquier County, Virginia; and in Fulton County, Kentucky, on Feb. 12, in non-poultry birds and commercial broiler chickens, respectively. On Feb. 8, bird influenza was detected in commercial turkeys in Dubois County, Indiana.

In a statement, the USDA’s Animal and Plant Health Inspection Service did not say whether the outbreak involved H5N1, the same highly pathogenic virus found extensively in wild birds and on the Indiana turkey farm.

Citing the U.S. Centers for Disease Control and Prevention, the USDA said that “these avian influenza detections do not present an immediate public health concern.”

“No human cases of these avian influenza viruses have been detected in the United States. As a reminder, the proper handling and cooking of poultry and eggs to an internal temperature of 165 [degrees] F kills bacteria and viruses,” the agency added.

The broiler chickens in Fulton County, located near the border with Tennessee, were infected with the same H5N1 strain of highly pathogenic avian flu as the turkeys in Indiana, Kentucky officials told Reuters. They said it is Kentucky’s first outbreak of the highly lethal bird flu, which killed more than 50 million U.S. chickens and turkeys in 2015.

Tyson Foods Inc. confirmed that a flock of about 240,000 chickens tested positive.

The disease is hitting the market as poultry supplies are down due to strong demand and labor shortages at meat plants during the COVID-19 pandemic. Government data showed U.S. frozen chicken supplies were down 14 percent from a year ago at the end of December while turkey inventories were down 23 percent.

The United States is the world’s largest producer and second-largest exporter of poultry meat, according to the U.S. government. Kentucky said it is the seventh biggest chicken meat-producing state. Almost 18 percent of U.S. poultry production is exported, and the industry is a major user of feed grains.

Human infections do occur after close contact with an infected animal, but they’re considered rare, CDC officials have previously said. No Americans are recorded to have contracted highly pathogenic avian flu viruses.

Around, 864 people have contracted it since 2003, causing 456 deaths, according to the World Health Organization and the CDC.

The first bird flu viruses are believed to have emerged in southern China before leading to large outbreaks in the late 1990s, according to the CDC, before the virus variants spread throughout the world.