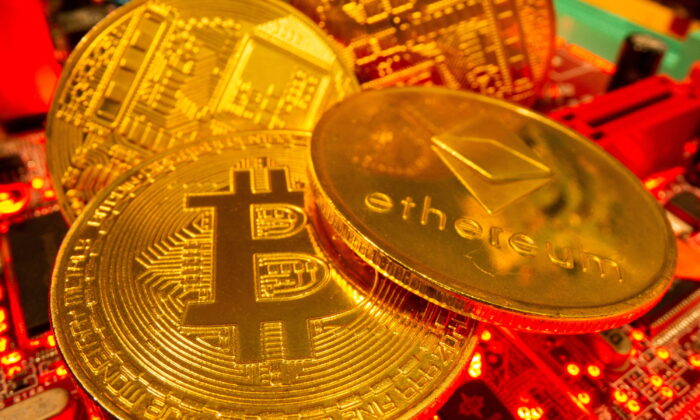 Representations of the virtual currency Bitcoin and Ethereum stand on a motherboard in this picture illustration taken on May 20, 2021. (Dado Ruvic/Illustration/Reuters)
By Tom Ozimek

Two senators—a Democrat and a Republican—will on Tuesday officially unveil a sweeping legislative proposal to regulate cryptocurrencies and other digital assets.

“As a former state treasurer, I am excited by the possibilities of incorporating digital assets into the American financial system. The legislation that @SenGillibrand and I are proposing will do just that,” Sen. Cynthia Lummis (R-Wyo) said in a tweet, referring to Sen. Kirsten Gillibrand (D-N.Y.), co-sponsor of the crypto bill.

In a separate tweet, Lummis shared an article from Bitcoin Magazine, which featured a link to the draft legislation, called the Responsible Financial Innovation Act.

“Thank you for your patience. I’m excited to FINALLY get this out the door. There will almost certainly be provisions you like. Perhaps there will be provisions you oppose. Getting this right will be hard but worth it,” Lummis wrote.

According to the draft cited by Bitcoin Magazine, the bill proposes legal definitions of digital assets and virtual currencies, while making a distinction between digital assets that are commodities or securities.

Fully decentralized cryptocurrencies like bitcoin and ethereum would be classified as commodities, and as such would be regulated by the Commodity Futures Trading Commission (CFTC).

The Securities and Exchange Commission (SEC), on the other hand, would oversee digital assets that are defined as securities, including coins used to raise money from the public, akin to a stock offering.

Under the bill, banks and non-bank financial institutions will be allowed to issue stablecoins, which will be required to maintain 100 percent reserves in “high-quality liquid assets.” [

The proposed legislation also includes a crypto tax break, making cryptocurrency purchases below $200 tax free and so facilitating their use for payments.

In a discussion on bitcoin and cryptocurrencies hosted by the Heritage Foundation in late May, Lummis called it a “very comprehensive” piece of legislation that aimed to strike a balance between innovation and regulation.

“The common ground is looking for the sweet spot between not stifling innovation but rather encouraging innovation, while at the same time, creating a regulatory framework that everyone understands,” Lummis said at the time.

Lummis has been a vocal advocate for cryptocurrency development, with her financial disclosures indicating she has invested between $150,002 and $350,000 in bitcoin.

The bill comes at a turbulent time for cryptocurrencies, including the May meltdown of the terraUSD stablecoin and luna, the coin meant to buy and sell assets.