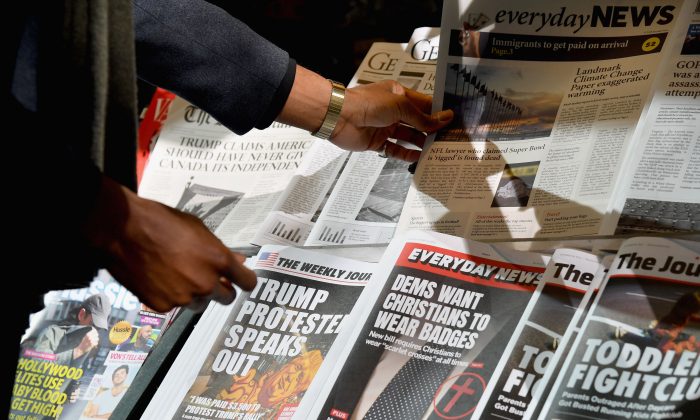 A misinformation newsstand, a first-of-its-kind newsstand set up by the Columbia Journalism Review, is seen in midtown Manhattan on Oct. 30, 2018. (Angela Weiss/AFP/Getty Images)
Companies

Good Information Inc. launched on Tuesday and is being led by former Democratic strategist Tara McGowan who previously ran a progressive non-profit called ACRONYM, which was backed by LinkedIn founder Hoffman. Others contributing to the multi-million seed effort include investors Ken and Jen Duda, and Incite Ventures.

In a press release on Oct. 26, Good Information Inc said its aim is to “restore social trust” and “strengthen democracy” by “investing in solutions that counter disinformation and increase the flow of good information online.”

“America is currently in the throes of a disinformation epidemic that is threatening public health, social trust, and democracy around the world. Good Information Inc. believes there is un-met audience demand for fact-based information, especially in local markets that have lost many of their legacy local news sources in recent years, and among audiences that are being left behind by evolving media business models,” the corporation said in a statement.

Good Information Inc. will be investing in media outlets that provide customers with trusted and fact-based information, as well as local community news, particularly in markets where there are little to no local news outlets reaching online communities.

Trump has maintained that there was “massive voter fraud” in the 2020 elections.

“Good information that upholds the truth, common sense, and shared values of a society is the lifeblood of democracy, and orchestrated disinformation—fueled and amplified by bias-driven algorithms—is its greatest threat. The disinformation crisis we are facing in America today is increasing polarization and eroding our trust in each other, which is having a corrosive effect on our democracy, jeopardizing public health, and destabilizing our economy,” founder and CEO McGowan said in a statement.

“This is no longer a political dispute about the truth, but the direct result of unregulated business models that are putting whole communities around the world at risk, and putting democracy around the world in peril.”

McGowan’s former progressive non-profit, ACRONYM, ran one of the biggest digital campaigns—costing $100 million—aimed at convincing millions of Americans to vote against Donald Trump in the 2020 elections, Fast Company reports.

One of the companies ACRONYM invested in, called Shadow, produced the vote tabulation app used in the Iowa caucuses and contributed to the delayed reporting of the results following a string of technical issues.

McGowan later apologized for the incident, telling Axios that the Shadow team, “made an enormous mistake that has dire consequences in this election and so we want to own that.”

Pat Kreitlow, who co-founded Courier’s Wisconsin news outlet UpNorthNews, said in a statement that the company is “extremely happy to be the first investment of Good Information’s portfolio.”

“We are seeing unparalleled threats to our country’s democracy and a free press today—threats so grave that the long-running fight against misinformation seems almost quaint as we confront outright disinformation from people preying upon Americans fears and anxieties to push their own agenda or profit margins,” Kreitlow said.