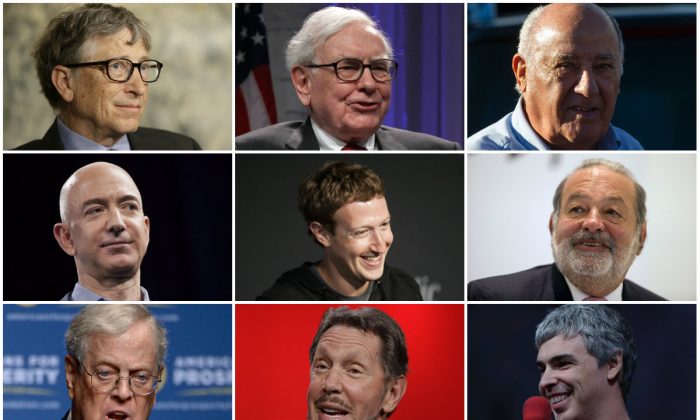 President Joe Biden's proposed new "billionaire's tax" would dramatically increase taxes for United States' households "worth" more than $100 million, but critics say its expansion in defining "income" will affect more than just 700-800 billionaires, such those above, and Republicans say it is a gimmick to boost Democrats' 2022 midterm prospects. (AP/Getty Images)
US

President Joe Biden’s proposed “billionaire tax” may sound good to many voters, but it is fraught with vagaries that could redefine—and expand—the nation’s tax code, according to first-look analyses across a range of publications and sites, from The Wall Street Journal to the Heritage Foundation.

It would levy a new income tax of 20 percent for households “worth” more than $100 million.

The aim is to chip away at the nation’s spending-over-revenues deficit by increasing revenues by more than $360 billion between 2023 and 2032 rather than scaling back spending, according to a White House Fact Sheet entitled, “President’s Budget Rewards Work, Not Wealth with new Billionaire Minimum Income Tax.”

Flanked by Office of Management & Budget Director Shalanda Young, when Biden introduced the 149-page proposed budget blueprint on March 28, he said only 100th (0.01 percent) of 1 percent of United States’ taxpayers would be affected by the new levy.

“Budgets are statements of values, and the budget I am releasing today sends a clear message that we value fiscal responsibility, safety and security at home and around the world, and the investments needed to continue our equitable growth and build a better America,” Biden said. “The billionaire minimum tax is fair, and it raises $360 billion that can be used to lower costs for families and cut the deficit.”

The fact sheet adds the projected $360 billion in revenues generated by the “billionaire minimum income tax” would come from households “worth” more than $1 billion and would “make sure that the wealthiest Americans no longer pay a tax rate lower than teachers and firefighters.”

“In 2021 alone,” it continues, “America’s more than 700 billionaires saw their wealth increase by $1 trillion, yet in a typical year, billionaires like these would pay just 8 percent of their total realized and unrealized income in taxes. A firefighter or teacher can pay double that tax rate.”

That “realized” and “unrealized” component of the “billionaire minimum income tax” is raising eyebrows because, in essence, it is “a first-of-its-kind tax on unrealized capital gains,” according to a budget breakdown by five fiscal policy analysts and researchers posted by the Heritage Foundation.

“Falsely billed as a ‘billionaire minimum income tax,’ this convoluted wealth tax proposal would result in less investment in America, reduced income for workers, and more power for bureaucrats, lawyers, and accountants,” they maintain.

Rep. Jason Smith (R-Mo.), ranking House Budget Committee Republican, is among critics noting the proposed “billionaires tax” changes the definition of “income” by making “unrealized capital gains” taxable for the first time. The current United States tax code taxes assets when they are sold; increases in asset values are not taxed until then.

Analysts also cite vagaries in how the tax would be assessed and levied, noting the proposal does not lay out a process for ascertaining how to define the $100 million in “worth” threshold, especially in calculating the taxable value of “accrued savings” that have not been taxed before.

Therefore, Biden’s proposal is a 20 percent tax on all income plus unrealized capital gains for households where that income and those assets are “worth” at least $100 million.

Under the plan, capital gains would be taxed as a “prepayment on the sale of the capital gains,” which defines it as income for the first time. It could also expand the taxable beyond the 700-800 megawealthy taxpayers the Biden administration claims would pay the tax.

“Many wealthy people own closely-held businesses and artworks that can be hard to value, so it could be tricky to determine who faces the tax,” writes Michael Rainey in a Fiscal Times analysis.

Constitutional scholars and tax law attorneys also question if the “billionaires tax” is legal under the 16th Amendment, which established an exemption in the United States Constitution’s “direct taxes” requirement—taxes apportioned among states “according to their respective numbers,” or population—that ultimately allowed the federal government to levy taxes based on an individual’s income.

Any attempt to assess unrealized gains on assets as income is certain to be challenged in courts with rulings potentially expanding the range of what can be taxed, critics contend.

“Taxing 700 fat-cats is not going to erase the towering debt of the government. That would require exploiting new, untapped sources of income,” writes George Washington University Shapiro Professor of Public Interest Law Jonathon Turley in The Hill. “Unrealized gains would open up a massive amount of potential taxable assets. Moving from 700 billionaires to 22 million millionaires would be based on the rationale of rich people not paying their fair share.”

Republicans also argue that Biden’s new tax is nothing more than a gimmick forwarded by a president heavily criticized for his handling of the nation’s economy to boost his parties’ prospects in the 2022 midterms.

“Tax the rich more” proposals have consistently garnered at least 68 percent approval responses by Americans since 2020.

Biden’s “billionaire tax” is also not necessarily new, with previous similar efforts failing to gain traction in Congress over the years.

The latest is a proposed 2021 bill filed by Senate Finance Committee Chair Sen Ron Wyden (D-Ore.) that would apply to taxpayers with more than $1 billion in assets or more than $100 million in income for three consecutive years.

Wyden’s bill has idled since Sen. Joe Manchin (D-W.V) said he’d vote against it as a “divisive” revision of the nation’s tax code.