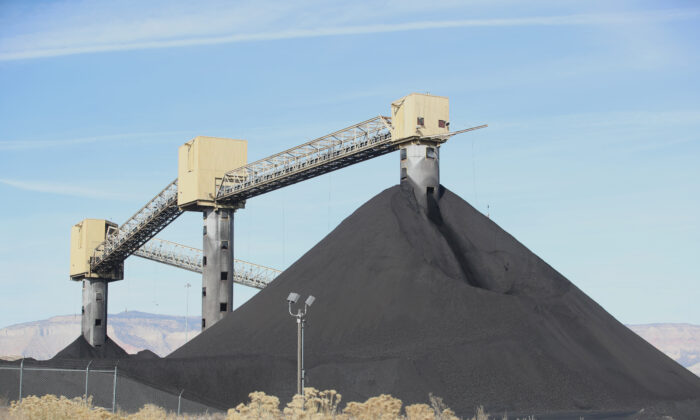 Piles of coal wait to be burned at PacifiCorp's Hunter coal-fired power plant outside of Castle Dale, Utah, on Nov. 14, 2019. (George Frey/AFP via Getty Images)
US News

Environmental groups and advocates are spending billions of dollars every year playing politics with America’s energy sector while simultaneously driving up energy costs for Americans, according to Ken Braun, the senior investigative researcher at the Capital Research Center.

President Joe Biden has issued a series of executive orders since taking office in an effort to tackle the climate crisis, slash greenhouse gas emissions by more than 50 percent by 2030 and become carbon-neutral by 2050.

While many have championed the president’s ambitious push toward green energy, he has also faced criticism from those working in the oil and gas industry, among others.

In an interview with EpochTV’s “Crossroads” program, Braun said that numerous companies, including the Natural Resources Defense Council, Sierra Club, League of Conservation Voters, Friends of the Earth, Greenpeace, and more, are pumping a combined billion dollars a year into promoting so-called green energy, in line with the president’s push, and move away from nuclear energy.

However, such companies are failing to recognize those renewable energies, which are weather-dependent, are not always reliable, and can also be costly.

“Most of the environmental movement, upwards of more than 1,000 organizations are spending over a billion dollars per year, pretending to be environmental stewards who oppose nuclear energy and promote these wind and solar fantasies that are land hogs and really destructive to our environment, in order to create energy that really isn’t going to get the job done for us,” Braun said.

“You intuitively know that these things don’t work, when the sun’s not shining, which happens in most places between eight and 14 hours a day. And the winds not blowing, and we don’t really have the battery storage to hold this power,” Braun said. “So if you really are concerned about reducing our carbon footprint, nuclear energy is the only way that you’re going to accomplish it in a reliable, non-weather reliant way.”

Braun noted that such environmental companies are greatly exaggerating the risks associated with the use of nuclear energy and that they fail to talk about the risks that come from using renewable energy sources.

The senior researcher said studies have shown that nuclear energy is 351 times safer per megawatt-hour created than coal, 263 times safer than oil, and 40 times safer than natural gas, which he said means it is is “basically right down there with wind and solar, as far as its risk to people” goes.

“There are risks in wind turbines and solar panels that we don’t talk about, such as the predatory birds that just get chewed up by these windmills,” he said. “And the industry has pretty much declared it a trade secret. We can’t know how many of these things we’re killing. I would argue one bald eagle’s life is not worth an entire wind farm for what the wind farm gives us, versus how just glorious these birds are and should be protected. … But that’s the kind of environmentalist I am.”

“All of these organizations and some of a couple of those that I mentioned have 100 plus million dollar budgets. Most of the big ones you hear about are pretending to be environmentalists and hypocritically arguing against nuclear energy. … But they’re driving up energy costs on the rest of us by doing that. And so, they are distorting the market and they aren’t even accomplishing their goals,” Braun said.

“That’s major, that’s a billion dollars distorting our energy choices just making our problems worse and not doing anything to reduce carbon emissions, which is what all this billion dollars is supposed to be spent for,” he added.

“If our argument is that we are trying to reduce carbon emissions—if that’s important to you, as the Sierra Club and the Environmental Defense Fund … and all these environmental groups that are saying that this is their number one priority—if it’s really your number one priority, then you should be going to a crash nuclear program and saying all these subsidies that you’ve been telling to throw at wind and solar, you should be putting it into nuclear power. But that’s not the argument they make.”