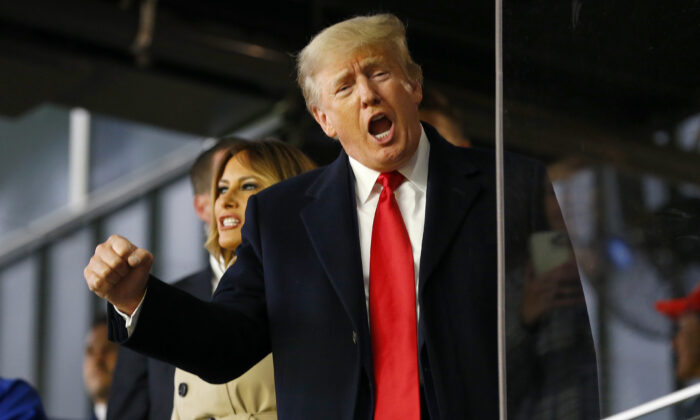 Former U.S. President Donald Trump waves prior to Game Four of the World Series between the Houston Astros and the Atlanta Braves Truist Park in Atlanta, Ga., on Oct. 30, 2021. (Michael Zarrilli/Getty Images)
2024 Election

O’Reilly said during an appearance on Dan Abrams’s NewsNation prime-time show that the former president called him to say that he plans to run again for office.

The former Fox News host said he told Trump that the move is “good for you.”

“This is good that people see another side of you, not a political side. You told the truth. You believe in the vax. Your administration did it, and you should take credit for it,” O’Reilly said he told Trump when he rang him shortly after a speaking tour in Dallas.

It comes after Trump on Sunday again hinted at a 2024 presidential run during his “History Tour” with O’Reilly in Orlando on Sunday.

“We won the first time, and the second time we won by even more. And it looks like we might have to think about very strongly a third time,” Trump told O’Reilly before a crowd in the Amway Center.

Trump didn’t comment when asked by O’Reilly if Florida Gov. Ron DeSantis would be a “possible No. 2,” in 2024.

“First of all, I think that people are going to be very happy with what I do,” Trump said, before adding shortly after: “He’s [DeSantis] certainly somebody that I like a lot. I can tell you that.”

DeSantis has become popular among GOP voters because of his firm stances against the Biden administration’s lockdowns, COVID-19 vaccine mandates, and immigration policy.

Trump, meanwhile, has been alluding to a possible run in 2024 for months. Previously, Trump said he would announce if he ran again after the 2022 midterm elections. He also said the reason he could not announce his run was because of the “very complicated” campaign finance rules and regulations.

A recent poll showed that 67 percent of GOP voters would choose Trump in a possible 2024 presidential race, RSBN reported.

“He is. That’s his intention,” she told reporters on Air Force One.

Harry Lee contributed to this report.