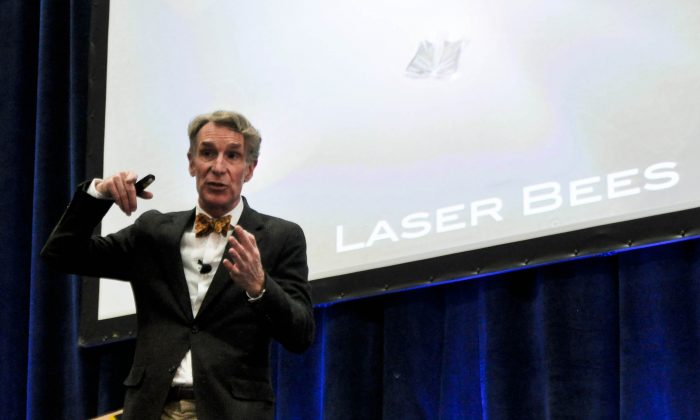 WASHINGTON—A swarm of flying robots spewing lasers may one day save the Earth. This mechanical doomsday task force, described by Bill Nye the famed “Science Guy” as “laser bees,” would attack threatening asteroids that may approach Earth.

Nye explained how the bees would work to a massive crowd that gathered to watch him speak on Sunday at the USA Science & Engineering Festival: the swarm of spacecraft, powered by solar panels, would shoot lasers at the surface of the asteroid and the ejected material would drive momentum, directing the asteroid away from Earth.

That’s one theoretical approach to asteroid control, anyway. Nye told the children in the audience, “I want you guys to figure out a way to deflect an asteroid.”

He recalled the meteor landing in Chelyabinsk, Russia, last year that caused widespread damage and injury. Within 24 hours of that meteor hitting, an asteroid that could have done much greater damage passed between Earth and its geosynchronous satellites.

Nye had another task for the future scientists in the audience: make big batteries that can efficiently store a huge amount of energy for the grid. He suggested further developing the magnesium-antimony liquid metal battery.

Most batteries don’t work as well when they become hot, and they inevitably become hot as they work. This new metal battery gets hotter and hotter, but still stores electricity all the while. It could store up electricity during the day and power the grid at night, Nye said. He asked the audience to imagine large magnesium-antimony batteries under big buildings or underground at the end of every city block.

“If you could figure out how to do this, you would not only change the world, but you would get rich—like Bill-Gates rich, like head-of-Ikea-guy rich,” Nye said.

Better energy storage is one aspect of building a smart grid; better energy transportation is another. Right now, scientists can only make nanotubes a few billionths of a meter long, Nye said, but “maybe you guys could make them much longer.” Spreading the energy through networks of nanotubes would make powerlines look primitive indeed.