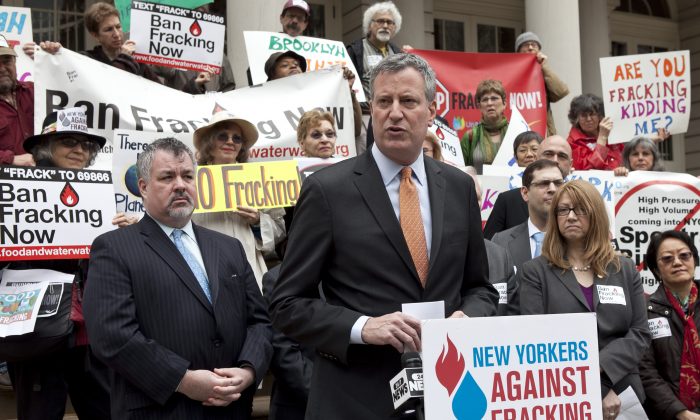 NEW YORK–Public Advocate and mayoral hopeful Bill de Blasio stood alongside city and state officials at City Hall April 11 in support of a two-year moratorium on hydraulic fracturing, also known as fracking. Approved by the State Assembly in early March, advocates hope the bill may will be addressed in the Senate this session, which begins next week.

The moratorium gives time for further study of the controversial practice of extracting natural gas from the ground by pumping water, sand, and chemicals into shale a mile or more below the earth’s surface.

De Blasio said he did not understand much about fracking when it first became an issue in 2008. His daughter urged him to view “Gasland,” a documentary by Josh Fox, which details some of the problems fracking brought to several small towns in Pennsylvania, Texas, and Colorado.

“You cannot watch Gasland without being profoundly affected,” de Blasio said, adding he is grateful New York State is waiting on the issue because the consequences are too great. “One false move on fracking, one step too far and you have lost a lot. You have poisoned the Earth in a way that we might not be able to recover from.”

Senator Tony Avella, who has been an opponent of fracking from 2009 when he was a member of City Council, was also on hand for the rally. Avella said he is amazed at how large the grassroots movement has grown.

He said he has introduced the bill in the Senate, and “this is going to be on the forefront of the Senate Democratic conference.” Avella vowed not to stop until the moratorium is passed.

The bill is not expected to pass the Republican-controlled Senate easily, especially considering a moratorium is already in place by the Governor’s office which prohibits permits being issued for high-volume fracking.

The current moratorium, in place since 2008, will be lifted when the Department of Environmental Conservation releases its guidelines. No timetable has been given.