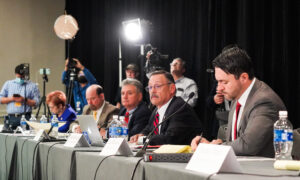 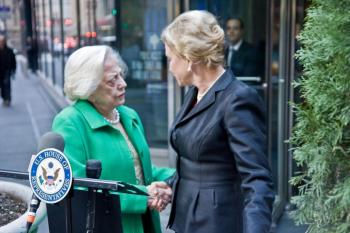 Rep. Carolyn Maloney (R) and the first woman to own a seat on the New York Stock Exchange, Muriel Siebert, stand in front of the former Bear Stearns' headquarters in Midtown Manhattan on Monday to introduce a new bill that will track spending of TARP funds. (Lixin Shi/The Epoch Times)
US

By Jasper Fakkert
Print
NEW YORK—Standing in front of the former Bear Stearns' headquarters in Midtown Manhattan, Rep. Carolyn Maloney (D-NY) introduced her “TARP Accountability Bill” on Monday. The bill aims at increasing transparency in the spending of the $700 billion government relief program for financial institutions by creating a public database that features real-time tracking of how funds are spent.

The $700 billion Troubled Assets Relief Program (TARP) was launched in 2008 by the Bush administration, aimed at strengthening market stability and regenerating the banking sector.

“The Treasury Department never required the financial institutions it funded to explain what they did with the money,” explained Maloney in a press release.

According to Maloney, the information of what has happened with billions of dollars of stimulus funds is now spread over 25 agencies.

Now attempting to bring all the information to a central location that is available to the public, Maloney aims to create a database available on the Internet that tracks the use of the TARP funds.

“The taxpayers have a right to know where TARP money has gone, and once my bill becomes law, they finally will be able to,” said Maloney.

The database would combine the government data with data collected by independent sources. It will also provide the ability to monitor inconsistencies in "near real-time" aiming to give insight into any misuse of funds.

Standing alongside Maloney was Muriel Siebert, the first woman to own a seat on the New York Stock Exchange. Siebert underlined the importance of creating transparency in how the funds are used.

With over 40 years of experience in the field of financial services business, Siebert, 76, said, referring to the financial crisis, "It is a set of circumstances never seen before."

Siebert says that those initiating the stimulus funds did a good job. “Our people acted fast. … They could have sat around and studied it but the world would have collapsed.”

The House of Representatives was originally scheduled to vote on the bill on Nov. 16, but the vote has been postponed.