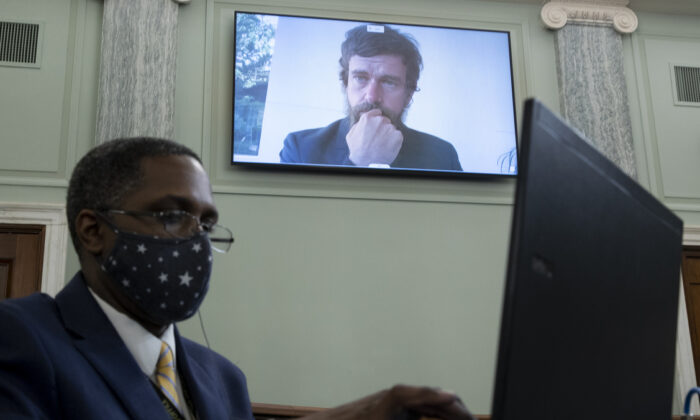 CEO of Twitter Jack Dorsey appears on a monitor behind a stenographer as he testifies remotely during the Senate Commerce, Science, and Transportation Committee hearing on Capitol Hill in Washington on Oct. 28, 2020. (Michael Reynolds-Pool/Getty Images)
Tech News

Senators grilled the CEOs of Twitter, Facebook, and Google over alleged anti-conservative biases on their platforms during a hearing on their moderation practices. It comes amid a cloud of growing bipartisan antitrust scrutiny and concerns over the censorship of a New York Post report.

Democrats asserted that the hearing was organized for political reasons, pointing to the timing of the election less than a week away, with some such as Sen. Brian Schatz (D-Hawaii) calling the session “bullying” and “nonsense.” Republicans, meanwhile, accused the companies themselves of interfering in the election.

They largely agreed that more transparency over their content moderation practices is needed.

“We are not doing that,” Dorsey replied. “This is why I opened this hearing for calls for more transparency. … We hear the concerns.”

Dorsey conceded that the blocking of the Post’s URL on Twitter was wrong.

“We recognized an error in policy, we changed it in 24 hours,” he said, noting that anyone can share the link to the article now.

An hour later, Cruz said the article could be shared.

The crux of the issue is Section 230 of the Communications Decency Act. Publishers can be held liable for any content they post, while social media platforms are protected by Section 230, which states that “no provider or user of an interactive computer service shall be treated as the publisher or speaker of any information provided by another information content provider.”

Cruz told The Epoch Times last week that Big Tech CEOs “are acting as Democrats’ willing henchmen, and they have more power than William Randolph Hearst, at the height of yellow journalism, could have only imagined.”

During the hearing, all three CEOs (who testified virtually) agreed the companies should be held liable if the platforms act as publishers.

Committee Chairman Roger Wicker (R-Miss.) said in his opening statement that he’s concerned these platforms have “become powerful arbiters of what is true and what content users can access.” He rejected the notion that any criticism was due to partisan politics.

“Although some of my colleagues on the other side of the aisle have characterized this as a purely partisan exercise, there is strong bipartisan support for reviewing Section 230,” Wicker said. “In fact, both presidential candidates, Trump and Biden, have proposed repealing Section 230 in its entirety—a position I have not yet embraced.”

Wicker, like other Republican senators during the hearing, brought up the censorship of the New York Post article on Hunter Biden. He criticized what he called a double standard, pointing out that a New York Times story on the president’s illegally leaked tax returns wasn’t censored, and the now-discredited Steele dossier was widely shared without fact-checking or disclaimers.

“This apparent double standard would be appalling under normal circumstances,” he said. “But the fact that selective censorship is occurring in the midst of the 2020 election cycle dramatically amplifies the power wielded by Facebook and Twitter.”

It’s not just politicians who worry about censorship on social media platforms. Roughly three-quarters of U.S. adults say it is “very likely” or “somewhat likely” that social media sites “intentionally censor political viewpoints that they find objectionable,” according to an August survey by the Pew Research Center.

While people across the political spectrum believe censorship is taking place, the belief is particularly strong among Republicans, the center said.

During the hearing, Zuckerberg went further than some of the other CEOs over what to do about Section 230. He acknowledged at one point that Congress “should update the law to make sure it’s working as intended.”

Dorsey and Pichai however warned that any changes could have major ramifications.

Conservatives have long accused Big Tech of censoring political speech, particularly that of those on the right. Democrats and Big Tech have repeatedly denied that such suppression exists.

Federal Communications Commission (FCC) Chairman Ajit Pai has said that his agency will move forward with President Donald Trump’s petition to clarify the meaning of the law.

In an Oct. 15 statement, Pai said the “FCC has the legal authority to interpret Section 230,” adding that “members of all three branches of the federal government have expressed serious concerns” about the interpretation of Section 230.

“If Big Tech persists, in coordination with the mainstream media, we must immediately strip them of their Section 230 protections,” he said in an Oct. 15 Twitter post. “When government granted these protections, they created a monster!”