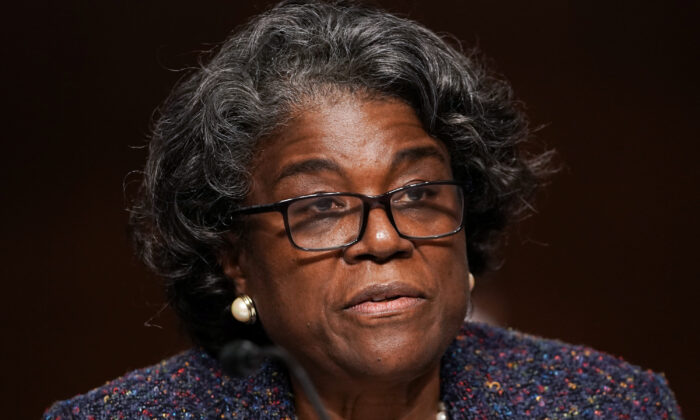 Linda Thomas-Greenfield speaks before the Senate Foreign Relations Committee hearing on her nomination to be the United States Ambassador to the United Nations, on Capitol Hill in Washington in Washington on Jan. 27, 2021. (Greg Nash/Pool/AFP via Getty Images)
Executive Branch

President Joe Biden’s nominee to become ambassador to the United Nations on Wednesday faced questioning over her past praise of China’s communist regime.

Linda Thomas-Greenfield, speaking at an event in 2019 put on by the communist-supported Confucius Institute network, spoke positively about China, telling the audience that the country has invested in Africa in a number of ways, including railway projects and other infrastructure development.

“Ultimately, the future is about Africa and its people. The U.S. should be focused on building a strong partnership with Africa which is based on shared values of peace, prosperity, sustained economic growth and development, and a firm commitment to good governance, gender equity, and the rule of law. I see no reason why China cannot share in those values. In fact, China is in a unique position to spread these ideals given its strong footprint on the continent,” she said.

During her confirmation hearing on Wednesday, senators pressed Thomas-Greenfield over the speech. Senate Foreign Relations Chairman Jim Risch (R-Idaho) said the biggest issue “was the lack of acknowledgment of the malign activities of China.”

The nominee told senators that she has a long track record of acknowledging those activities and expressed regret for accepting the invitation to speak at the Savannah State University Confucius Institute.

Thomas-Greenfield also said she was “surprised” that the institute was involved in activities in Georgia high schools and elementary schools.

Sen. Ted Cruz (R-Texas) later said he has believed for a long time that the biggest threat to America is China and said he’s growing concerned about that he described as a pattern among Biden nominees “of consistently moving towards and embracing the Chinese Communist Party.”

The pattern became worse, he said, when the speech Thomas-Greenfield gave came to light on Tuesday, noting that Congress passed legislation cracking down on Confucius Institutes because of their role in spreading propaganda.

“At the same time that the United States Congress and the United States government is acting to combat the spying, the espionage, and the propaganda coming from Confucius Institutes, run and controlled by the Chinese communist government … you were apparently going to a Confucius Institute, giving a paid speech, and praising China. How do you reconcile those two?” Cruz asked.

“I want to say in no uncertain terms that I look forward to working with this body to address these issues. You have taken some incredible steps and I support all of those steps, and I will be working aggressively against the Chinese efforts in New York,” she added.

Sen. Bob Menendez (D-N.J.) later said that he looked at the speech and believed Thomas-Greenfield was “playing a little jujitsu, challenging China to promote good values such as gender equity and the rule of law.”

“That was exactly my intention,” Thomas-Greenfield said.