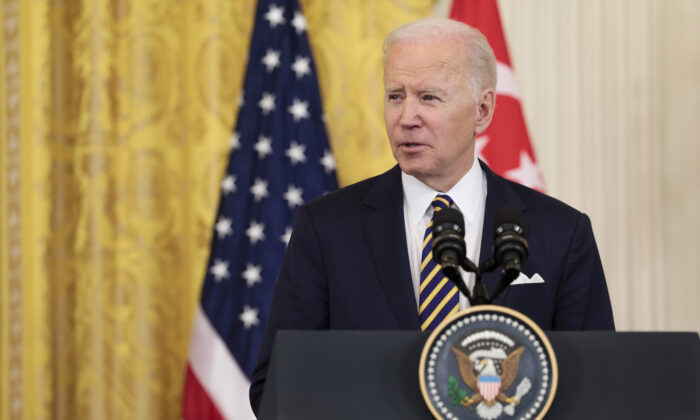 To help fund his over-the-top spending proposal of $5.8 trillion in post-COVID fiscal year 2023, President Joe Biden has called for a brand new tax on wealth in addition to the current tax on income. He would tax assets that have appreciated since they were purchased.

This sounds like a capital gains tax, but it has an entirely new wrinkle: The tax would be levied before the owner actually sells the asset and realizes a gain. It would be a tax on a paper gain—a phantom gain, not a real one.

Biden’s political allies have come forth trumpeting the alleged virtues of such a tax. As typified in a Wall Street Journal opinion piece by Jason Furman, a Harvard economics professor who served as chairman of the White House Council of Economic Advisers during President Barack Obama’s second term, progressives claim that such a tax would be “fair.” Is that claim true? As the saying goes, not exactly.

After correctly mentioning that capital gains taxes currently are “collected … only when an asset is sold,” which is practical because that timing “matches the payment of taxes with the cash that is generated to pay those taxes,” Furman proceeds to identify “three major disadvantages” of waiting until an asset is sold before taxing gains. These so-called “disadvantages” all happen to fall on the government, not the taxpayer. (Surprise!)

The first alleged disadvantage is that not taxing gains until an actual profit is realized by selling an appreciated asset “encourages people to hold on to assets” and thereby defer paying taxes. Further, those paper gains remain untaxed if the owner dies, because his or her heirs receive the appreciated asset on a “step-up” basis—that is, their own cost basis for the asset is its price at the date of death of the person making the bequest, not the original purchase price. The step-up basis is irrelevant if the asset has gone down in price, but for the many assets that have appreciated, it lowers the new owner’s tax liability when he or she sells the asset.

Alas, Furman, Biden, and congressional progressives are impatient: They want more tax revenues now, so they want to tax paper gains before they’re actual gains. This is highly problematic. It reminds me of the Tom Cruise movie “Minority Report,” in which people were arrested before they committed crimes because state-controlled psychics “foresaw” crimes before they happened. Punishing someone before they have committed a crime is anything but “fair” as Americans understand fairness.

Similarly, taxing a gain before it has been realized by an actual sale (as opposed to a hypothetical gain) rests on an assumption that may or may not prove true. It assumes the owner someday will sell the asset for a capital gain. In the real world, though, as anyone who has minimal familiarity with the stock market can see, once-soaring stock prices often come crashing back to Earth. Paper gains often turn out to be real losses.

Furman tells us not to worry, that the feds will go easy on the rich Americans targeted by this new tax by allowing them to pay 20 percent of their tax liability on paper gains each year for five years; further, that if the asset goes down in value sometime during that time period, the taxpayer won’t have to pay 20 percent in that particular year. Question: Would such a taxpayer get a refund on the annual tax payments already made on an asset that formerly showed paper gains, but later was sold below the purchase price? Nope. Uncle Sam gets to keep that money. That would run counter to settled law, common sense, and fundamental justice. Only progressives would think it “fair” to tax an American on a capital loss.

The second objection Furman presents for overturning the current law that taxes only actual gains is that it’s “unfair” for Americans of “similar income or wealth to be taxed at different rates.” As an example, he objects to a person who makes a large capital gain through stock investments paying a lower tax rate than a taxpayer who held stocks that didn’t appreciate as much, but instead paid dividends.

This ignores the fact that investors freely choose what kind of stocks they want to invest in. Some individuals happily give up the possibility for massive capital gains by buying stocks that pay regular dividends. Such stocks typically are favored by investors trying to minimize risk. Stocks that don’t pay dividends are more likely to soar to the moon—and also more likely to crash. Stocks that pay regular dividends supply an ongoing income stream in exchange for greater potential capital gains and greater potential for catastrophic losses.

“Different strokes for different folks.” What’s unfair about letting each individual investor decide how much risk to take on? And if Furman really finds the higher tax rates on dividends than on capital gains objectionable, the economically fair way to fix that problem is for government to stop the current practice of double-taxation, i.e., taxing dividends that corporations pay out after already having paid taxes on the corporation’s profits.

According to Furman, the third “disadvantage” of waiting to tax capital gains when capital gains are actually realized is that the current way of taxing capital gains “requires higher federal tax rates and more kinds of taxes to reach revenue goals.” Translation: You should support our effort to impose this new tax on the rich, because we’re going to be spending gobs and gobs of money, and if we can’t get enough tax revenues from the rich, we’ll get it from you. Class warfare, anyone?

Whether you’re rich or not, the proposal to tax wealth in addition to income is ominous. It indicates that the federal government’s continued overspending will prompt politicians to resort to increasingly desperate measures to raise revenue. Buckle up, folks. It’s going to be a bumpy ride.