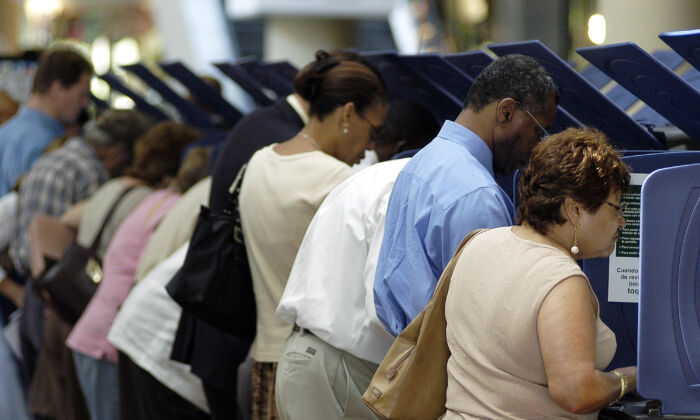 Less than half of Hispanic Americans, compared to a result from last year, told pollsters that they like the job President Joe Biden is doing, against the backdrop of the ongoing baby formula shortage, border crisis, skyrocketing inflation, and fuel crisis.

Three-fifths or 60 percent of Hispanics disapprove of Biden’s performance, while 26 percent approve and 13 percent said they did not know or had no opinion, according to a Quinnipiac University poll (pdf) published on May 18.

A similar survey from a year ago found that 55 percent of Hispanic voters—more than twice the current rate—approved of Biden, while only 29 percent disapproved.

Making up about 18 percent of the U.S. population, the group has seen a lean conservative trend, according to the study, as almost half of Hispanic registered voters said they would like to see the GOP take control of the Senate, while 36 percent said they hope Democrats would keep control of the chamber.

It also shows that 48 percent of Hispanic voters want to see Republicans win the House of Representatives if the election were under its way, compared to only one-third who wanted Democrats to seize the power.

The survey interviewed 1,586 adults nationwide, including 1,421 registered voters, with a margin of error of 2.6 percentage points.

“Americans give President Joe Biden a negative 35–57 percent job approval rating with 7 percent not offering an opinion,” according to the findings.

The recent findings come as the November midterm elections are fast approaching as the Biden administration wrestles with a series of crises including the domestic economy and national security.

The poll also shows black Americans are losing faith in the administration.

The 63 percent of polled black Americans who currently approve of the president has seen a year-on-year drop from 85 percent in 2021. By contrast, the 28 percent disapproval rate has soared up from 5 percent.

An April poll (pdf) by the Convention of States Action and Trafalgar Group shows that a majority of U.S. voters, including nearly two-thirds of Hispanic voters, believe that the Biden administration should close the southern border until a solution is reached.

Earlier this month, another poll conducted by ABC News/Washington Post found that less than a third of Americans approve of the way that Biden is dealing with the economy, while 94 percent expressed concerns about spiking prices as inflation hits a 40-year high.