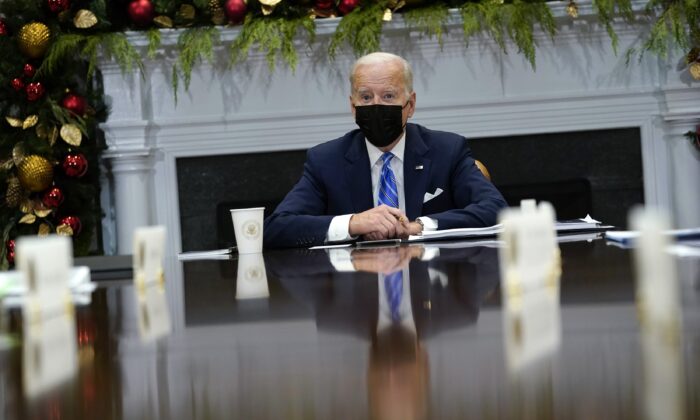 The Department of Health and Human Services’s (HHS) Centers for Medicare & Medicaid Services (CMS) issued the mandate last month despite not having clear authority from Congress to do so, U.S. District Judge Matthew Kacsmaryk, a Trump nominee, said in a 31-page ruling on Dec. 15 entering a preliminary injunction.

The Biden administration has cited the Social Security Act as enabling it to impose the mandate, which would force every health care employer in the nation that accepts Medicare or Medicaid funding to fire unvaccinated workers if it’s not blocked by Jan. 4, 2022.

Sections of the act do let the health secretary make rules, but the law does not mention vaccines.

The act specifically states that the secretary may not “exercise any supervision or control … over the selection, tenure, or compensation of any officer or employee of any institution, agency, or person providing health services,”  Kacsmaryk noted.

“Here, the CMS mandate far exceeds its statutory authority. It allows the HHS secretary to make a healthcare worker’s employment status dependent on COVID-19 vaccine compliance,” he added. “Congress forbids such interference into employment decisions. Further, public health and safety regulation beyond facility standards is emphatically the province of the states through their police powers.”

“This mandate is downright unconstitutional & the courts agree,” he wrote on Twitter.

The ruling means the mandate is blocked in 25 states.

The vaccination requirement was blocked nationwide but an appeals court ruled earlier this week that the judge who did that provided “little justification” and rolled the preliminary injunction back to affect only 24 states.

The mandate, however, remains suspended. CMS suspended it in a Dec. 1 memo due to courts blocking it for now.

A CMS spokesperson told The Epoch Times in an email that the agency is reviewing the recent decisions and is evaluating the next steps regarding the mandate.

In another ruling handed down Thursday, U.S. District Judge Dee Drell said Biden’s mandate for federal contractors must not take effect for state employers in Louisiana, Mississippi, and Indiana.

The contractor mandate is already blocked nationwide by a preliminary injunction, but Drell, a George W. Bush nominee, made clear that the administration cannot enforce any related guidance on the plaintiff states.

Jeff Landry, the Republican attorney general of Louisiana, said the ruling “ensures Louisiana will remain protected if the nationwide injunction is overturned.”