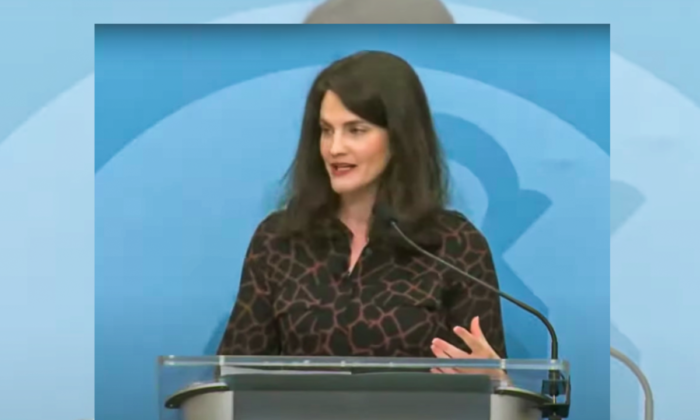 The Biden administration’s new disinformation chief had previously stated that Republicans and media who expose critical race theory (CRT) making its way into public school classrooms are “disinformers” who “weaponize” the issue “for profit.”

Nina Jankowicz, who was appointed to lead the newly established Disinformation Governance Board at the Department of Homeland Security, dismissed the pushback against CRT indoctrination at an event in Ohio last October, when the debate over parents’ right to direct their children’s education had taken center stage in high-profile elections, including Virginia’s gubernatorial race.

“Critical race theory has become one of those hot-button issues that the Republicans and other disinformers, who are engaged in disinformation for profit, frankly, … have seized on,” she said in a video of the event that has recently regained attention.

Jankowicz added that she lived in Virginia, where parents in Loudoun County fiercely resisted attempts to inject leftist political activism into local school curricula and policies. She called Loudoun “one of the areas where people have really homed in on this topic.”

“But it’s no different than any of the other hot-button issues that have allowed disinformation to flourish,” she said. “It’s weaponizing people’s emotion.”

Jankowicz then told her audience to be alert when they read news articles that make them feel emotional, adding that she supports government-funded, left-leaning institutions such as NPR and PBS, because these media outlets “get into the nuance of the issues” and “provide a balanced, nonpartisan source of information.”

Jankowicz’s speech at the City Club of Cleveland took place on Oct. 29, 2021, weeks after U.S. Attorney General Merrick Garland released a memo bringing together a coalition of federal and local law enforcement to address alleged “threats of violence” against teachers and school board members from unruly parents.

Garland has conceded that his memo was based in part on a September 2021 letter to President Joe Biden by the National School Boards Association. The now-notorious letter characterized disruptions at school board meetings as “a form of domestic terrorism and hate crime,” and urged the Departments of Justice and Homeland Security and the FBI to invoke counterterrorism laws to quell “angry mobs” of parents, who sought to hold school officials accountable for promoting CRT and for imposing COVID-19 restrictions such as mask mandates on their children.

Jankowicz’s comments resurfaced as her new post, tasked with addressing “disinformation that imperils the safety and security of our homeland,” has generated much scrutiny. Many have since compared the disinformation board to George Orwell’s fictional “Ministry of Truth,” the main purpose of which was to rewrite history to manipulate and control the population.

“The Biden administration wants a government agency dedicated to cracking down on what its subjects can say, an idea popular with Orwellian governments everywhere,” Sen. Tom Cotton (R-Ark.) said in a May 3 statement. “This board is unconstitutional and un-American.”

Cotton has introduced a proposal that would bar any federal funds from going to the board. He was joined by 18 Republican senators as co-sponsors.

Correction: A previous version of this article incorrectly stated who Jankowicz identified in her statements. She specifically was talking about Republicans and media organizations. The Epoch Times regrets the error.