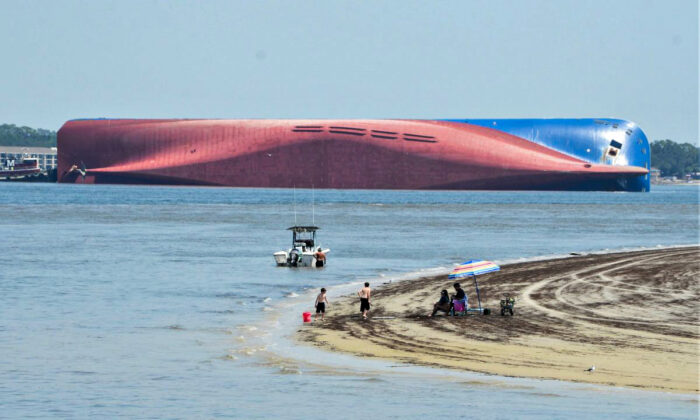 People are shown on Jekyll Island's Driftwood Beach as the Golden Ray cargo ship is capsized in the background, off the Georgia coast, on Sept. 8, 2019. (Terry Dickson/AP Photo)
Cryptocurrency

President Joe Biden’s Wednesday executive order on cryptocurrency outlines a range of new policy objectives and measures, including language on the climate-related effects of cryptocurrencies and on the potential for a U.S. central bank digital currency (CBDC).

Section 5 of the EO, “Measures to Protect Consumers, Investors, and Businesses,” includes a subsection, (b) vii, telling the Director of the White House Office of Science and Technology Policy (OSTP) to lead work on an interagency report examining climate and energy concerns around cryptocurrency.

The OSTP is currently led by Alondra Nelson, a social science professor at the Institute of Advanced Study with a doctorate in American studies, who has been a member of the World Economic Forum’s Network on AI, IoT, and The Future of Trust.

Biden’s EO asks the OSTP-led group to consider “the potential for these technologies to impede or advance efforts to tackle climate change at home and abroad” as well as “the effect of cryptocurrencies’ consensus mechanisms on energy usage.”

The two main consensus mechanisms used to validate cryptocurrency transactions are proof of work (PoW) and proof of stake (PoS).

PoW, which is used by Bitcoin, makes miners compete to solve a mathematical puzzle. PoS, meanwhile, ties mining power to the number of coins staked for potential review of a new block.

PoS uses less energy than PoW, which is why it has garnered more support from environmental groups like the Natural Resources Defense Council (NRDC).

Peter St Onge, a research fellow in economic policy at the Heritage Foundation who studies cryptocurrency, told The Epoch Times that the EO’s language on climate and energy use was less aggressive than many in the cryptocurrency community had feared.

“It looked almost like a throwaway line, given how many activists have been attacking on those vectors,” he said. “Overall, they’ve demoted that in their rank of concerns.”

He agreed that the Biden administration could be shifting its rhetoric or policy focus from climate in light of surging energy prices.

St Onge said he is both surprised and concerned by the EO’s discussion of a future digital dollar, subject of EO Section 4.

It states: “The Administration places the highest urgency on research and development efforts into the potential design and deployment options of a United States CBDC.”

Biden’s EO instructs the Secretary of the Treasury Janet Yellin, to lead the development of a report on the future of money and payment systems. It also requests a report from the Chairman of the Federal Reserve Jerome Powell, addressing whether a CBDC could make the monetary system more efficient while enabling monetary policy to serve as what the EO called a “critical stabilization tool.”

According to St Onge, the Fed could pursue more aggressive monetary policy with a digital currency at its disposal.

“My general view on CBDCs is that they’re an absolute abomination—they bring in a China-style surveillance state,” he said.

The Epoch Times has reached out to the Department of Treasury to see if its report on a CBDC will include some consideration of climate change and pollution.

The Epoch Times has also reached out to the OSTP to see if its report on the climate and energy dimensions of cryptocurrency will include a discussion of CBDCs, and if the White House has a preference for the lower-energy PoS consensus mechanism over PoW.

According to St Onge, a CBDC could require less energy than many cryptocurrencies because it does not need energy for validation—“It could function on a central computer with a password.”

Yet any digital security for a CBDC would also necessitate some energy consumption.

He pointed out that Bitcoin and other cryptocurrencies rely on such energy-intensive validation processes precisely so as to resist government attacks.

St Onge, a Misean economist, has written in the past about the massive carbon footprint of central banking, which he argues includes inflationary cycles driven by those institutions.