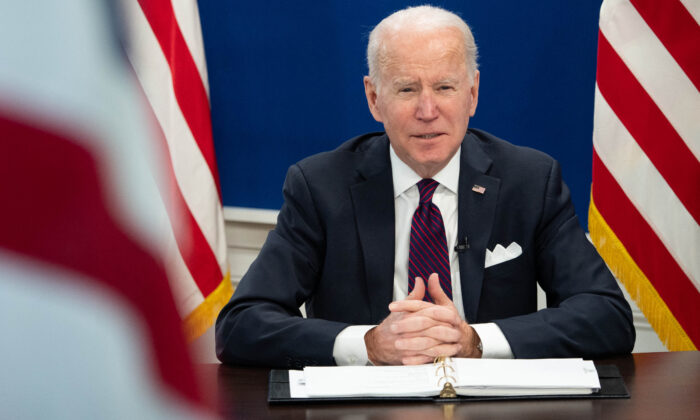 Biden does not have the authority to impose such a mandate, U.S. District Judge Jeffrey Brown wrote in a 20-page ruling obtained by The Epoch Times.

Federal law says the president “may prescribe regulations for the conduct of employees in the executive branch,” and government lawyers argued that the act of becoming vaccinated is “plainly ‘conduct.'” The judge, though, sided with plaintiffs, who asserted the conduct cited must be “workplace conduct” for him or her to regulate it.

“So, is submitting to a COVID-19 vaccine, particularly when required as a condition of one’s employment, workplace conduct? The answer to this question became a lot clearer after the Supreme Court’s ruling earlier this month,” Brown said, referring to the Supreme Court’s recent finding that the Biden administration’s COVID-19 vaccine mandate for private businesses appeared to fall outside of its powers as conferred by Congress.

“The Supreme Court has expressly held that a COVID-19 vaccine mandate is not an employment regulation. And that means the President was without statutory authority to issue the federal worker mandate,” he added.

He said that without entering a preliminary injunction, or blocking the order for now, federal workers who have not gotten vaccinated or been approved for an exemption face suspension or termination or other negative consequences.

The covered agencies include the Department of Defense, the Transportation Department, and the CIA.

The lawsuit was brought by Feds for Medical Freedom, a grassroots coalition that includes federal workers, and other groups.

“Today’s decision by Judge Brown is a victory for the thousands of men and women who want to serve their government without sacrificing their individual rights,” Marcus Thornton, president of the group, told The Epoch Times in an emailed statement.

“The 6,000+ members of Feds for Medical Freedom want nothing more than to continue their service to this country without being subjected to unconstitutional mandates. For the time being, the court’s ruling grants them that wish, but the fight is far from over. We will continue to pursue every lawful avenue available to ensure our members’ rights are respected and their service is honored appropriately,” he added.

In a motion for an injunction, plaintiffs said Biden “acted beyond his lawful delegated authority” in issuing the mandate and another for federal contractors that has been ruled against by several courts.

In a motion opposing the request, defendants said the orders were designed to stem the spread of the virus that causes COVID-19 and fit “comfortably within the President’s broad authority to oversee the Executive Branch workforce.”

Shortly after Brown’s order was issued, the government appealed it to the U.S. Court of Appeals for the Fifth Circuit.

The appeals court could uphold the ruling, which would likely lead to a showdown at the Supreme Court, or lift the injunction while the case works its way through the courts.