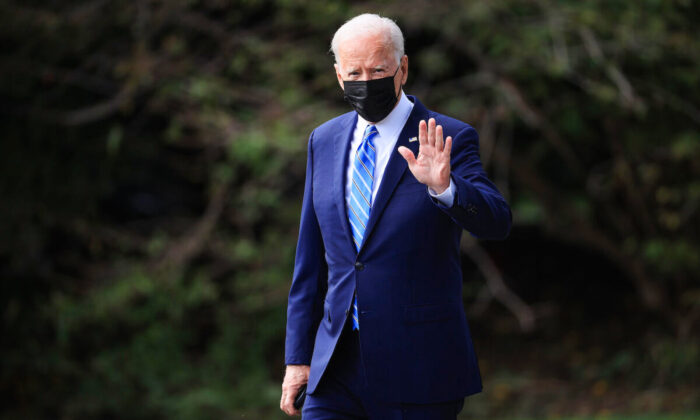 U.S. President Joe Biden walks across the South Lawn as he leaves the White House on Oct. 7, 2021. Biden was traveling to the Chicago area to promote his Build Back Better agenda while also encouraging employers to have their employees vaccinated. (Chip Somodevilla/Getty Images)
US News

Emma Riley, White House communications chief of staff, became the second person in the Biden–Harris team to hand in a resignation in a week, when she announced that she’s leaving her post for a job in the Labor Department.

“It was an honor and privilege to serve POTUS and the American people at the White House,” Riley wrote on Twitter on Nov. 19, adding that she’ll be working with Labor Secretary Marty Walsh, for whom she worked as an associate press secretary when Walsh was mayor of Boston.

Riley’s announcement came the day after the departure of Ashley Etienne, communication director for Vice President Kamala Harris. A White House official said in a statement that Etienne was a “valued member” of the team who would be leaving in December to “pursue other opportunities.”

The resignations come as recent polls indicate a sharp decline in approval ratings for both Harris and President Joe Biden. A poll from RealClearPolitics shows an overall 41.3 percent approval for Biden’s job performance, while Harris’s favorable opinion rate stands at 40.2 percent. However, a USA Today/Suffolk University poll released on Nov. 7 showed a dismal 28 percent approval rating for Harris, 10 points less than Biden’s 38 percent.

The Biden–Harris team’s approval ratings have plunged amid a series of reports about Harris allegedly struggling in her role as vice president and alleged conflicts between Harris’s staff, allies, and the broader administration. On Nov. 12, near the end of Harris’s trip to France, The New York Times published a story saying Harris has produced a “mixed” track record during the first 10 months of her vice presidency. A few days later, CNN reported growing frustration among a number of Harris staffers who believed that their boss was being “sidelined.”

“Many current and former West Wing aides say that Vice President Kamala Harris is not being adequately prepared or positioned, and instead is being sidelined, causing frustration among staffers,” CNN said.

The Epoch Times has been unable to verify such reports, which nonetheless prompted the White House to publicly affirm Biden’s support of Harris.

“The president selected the vice president because—to serve as his running mate—because he felt she was exactly the person he wanted to have by his side to govern the country,” White House press secretary Jen Psaki, who returned after having tested positive for COVID-19, told reporters at a White House briefing on Nov. 15.

“She is a key partner, she’s a bold leader, and she is somebody who has taken on incredibly important assignments, whether it is addressing the root causes of migration at the Northern Triangle or taking on a core cause of democracy in voting rights,” Psaki said.