Biden’s Anti-Drilling Policies Have Cut Oil Supplies as Much as the OPEC+ Decision, Study Reveals 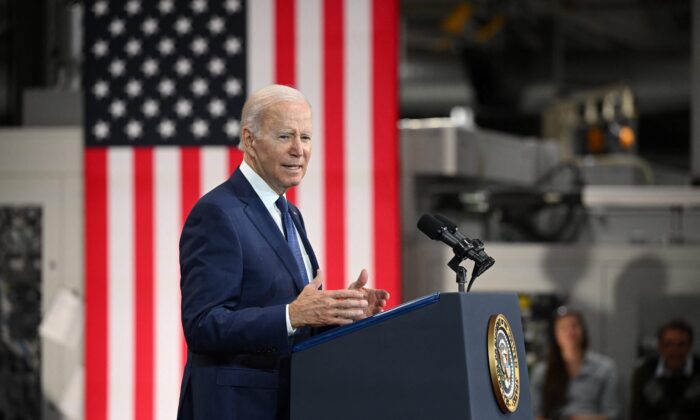 President Joe Biden’s anti-drilling policies have cost the United States about the same rate of daily oil production that was recently slashed off world markets by members of the Organization of the Petroleum Exporting Countries (OPEC).

“The United States would be producing between 2 and 3 million more barrels of oil a day and between 20 and 25 more billion cubic feet of natural gas under the Trump policies,” said a recent study (pdf) by the organization Committee to Unleash Prosperity. “This translates into an economic loss—or tax on the American economy—of roughly $100 billion a year.”

OPEC, which includes major producers such as Saudi Arabia and Russia, announced it was reducing oil production by 2 million barrels per day, in a move seen as a setback for Biden. The U.S. president had visited Saudi Arabia in July to push the kingdom into increasing production amid historically high U.S. gas prices.

The analysis by the Committee to Unleash Prosperity found that the “United States would not have had to sell a single barrel of oil from the Strategic Petroleum Reserve if the Trump drilling policies had remained in place.”

By the end of this month, Biden will have drained the reserves to a 38-year low. When he took office in the beginning of 2021, the SPR carried a stock of 638 million barrels, which since has to 416 million, a reduction of almost 35 percent, with more to go.

There would have been 657 million barrels of oil contributed to the fuel supply in the country if Trump-era business conditions were maintained, compared to the 145 million barrels outputted from the reserves over a period of 250 days, said the study.

Although Biden claims he’s “doing all I can” to reduce fuel prices and that the country is “approaching record levels of oil and natural gas production,” the current administration has displayed hostility toward the oil and gas industry, while shifting the price-blame toward major oil companies, said the report.

The current pain at the pump can mostly be attributed to taking “hundreds of thousands of acres offline for drilling, to canceling pipelines, to restrictive environmental regulations that make drilling more expensive.”

The report concludes with the recommendation to increase U.S. production that would contribute “a lot” toward reducing energy prices rather than releasing reserves because of the “comparatively small magnitude of the releases,” and the need to replenish reserves.