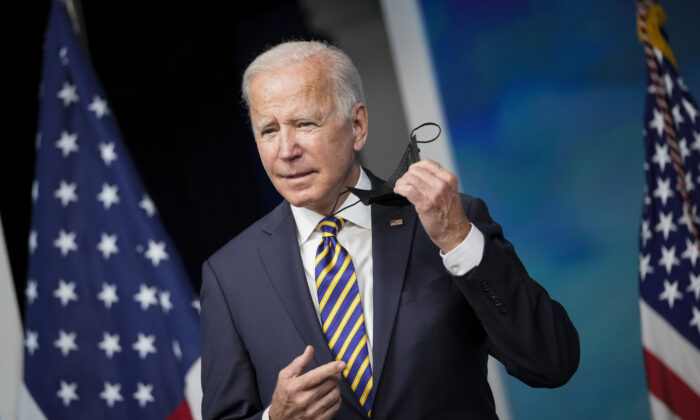 President Joe Biden removes his face mask as he arrives to speak in the South Court Auditorium on the White House campus on Oct. 14, 2021. (Drew Angerer/Getty Images)
AMERICA

Amid the COVID-19 pandemic, some governors are disappointed with President Joe Biden’s lack of engagement, saying they can’t even tell whether their feedback, questions, and requests are reaching the president.

While the administration continues to hold weekly conference calls with governors, which began under President Donald Trump, Biden has yet to attend. Vice President Kamala Harris has only briefly attended one call and took no questions, according to several governors.

The office of one governor praised the calls under the Biden administration for providing clear federal direction, while some governors have stopped attending the calls, saying they are no longer useful.

The calls, hosted by the National Governors Association (NGA), have been a mainstay since early in the pandemic. During the Trump administration, Vice President Mike Pence was in charge of the anti-pandemic effort and attended most of the calls; Trump joined eight of them. They served as an opportunity to share best practices of fighting the virus from different states, update the administration on the situations and issues in different parts of the country, and raise questions and requests directly to the president or vice president.

Pence “would muster the resources that governors needed” and “got high marks from both Republicans and Democrats about how fairly he treated everybody,” he said.

“It really demonstrated the level of engagement that the Trump administration had with regard to the pandemic that is lacking with the Biden administration.”

Under Biden, the White House is represented during the calls by Jeffrey Zients, former head of President Barack Obama’s National Economic Council and Biden’s coordinator of the anti-pandemic effort.

“In general, these calls often felt more like a chance for the Biden Administration to tell governors about decisions that had already been made, rather than asking for input from governors on major decisions that impact states,” said Christina Pushaw, spokeswoman for Florida Gov. Ron DeSantis.

“Because of this approach from the Biden Administration, these group calls have fallen far short of what they could and should be: a constructive dialogue between governors and the president or vice president.”

DeSantis’s office has participated in only some of the calls this year, she told The Epoch Times via email.

“We felt that the dialogue was skewed and unnecessarily politicized, especially with then-Governor Andrew Cuomo serving as NGA Chair through July 2021.”

The former New York governor resigned in disgrace in August after several accusations of improper behavior toward staffers and amid an ongoing scandal over his forcing nursing homes to accept recovering COVID-19 patients early in the pandemic, which appears to have exacerbated the high COVID-19 mortality rates in nursing homes.

A White House official previously told Real Clear Politics that Cuomo was put in charge of the calls because the pandemic response reached a different stage, change was needed, and after feedback from governors.

The administration has medical experts rather than politicians attend the calls, which are “not the sole mechanism” for talking to governors, the official said. The official also noted that, unlike Pence, Harris isn’t charged with managing the pandemic response but rather with addressing the “root causes” of the southern border crisis.

Ricketts noted, though, that there is value in addressing White House leaders directly.

“As an executive, I know that it is important for me to hear directly from people, to get first-hand knowledge,” he said.

With Pence, he said, there was a chance to “solve problems directly, because somebody at the top was taking a personal interest in it.”

That sense has evaporated under Biden, according to some governors.

South Dakota Gov. Kristi Noem stopped attending the calls in March because they were “a waste of time,” according to her spokesman, Ian Fury.

“By then, it had become clear that POTUS and VPOTUS weren’t interested in participating,” he told The Epoch Times via email.

Dissatisfaction with the calls has been, at least to some degree, bipartisan, according to Ricketts.

“These are Republican and Democrat governors. They’re asking questions and seeking answers and sometimes, there’s a high-level frustration with the lack of responsiveness from the administration,” he said.

On the other side of the aisle, Mike Faulk, spokesman for Washington Gov. Jay Inslee, acknowledged that no “inter-governmental relationship comes without the potential for communications issues,” but expressed a preference for the Biden administration’s approach to the calls over those under Trump.

“What states need from these calls is reliable, consistent, and candid information about the direction of the federal government, how that helps states, and how we can collaborate as partners,” he told The Epoch Times via email. “We are getting that hand over fist compared to the Trump administration.”

He said Trump joined the calls to “praise himself, demand praise from others, and deride those who were serious about the business of defeating this pandemic.”

“This is absolutely false,” countered Ricketts’s spokesman Taylor Gage via email to The Epoch Times.

Faulk further asserted that Pence was “engaged early in this process at the direction of the president,” but “as the pandemic dragged on, Pence was slow to provide clarity on the government’s direction and was increasingly absent from these calls.”

“Not true either,” Gage retorted.

According to Pushaw, Pence attended at least 40 of the 49 calls under Trump.

Faulk characterized Trump’s response to the pandemic as “counterproductive, short-sighted, strategically adrift,” and “profoundly inadequate.” He praised Biden’s response, saying that outside of the calls, there’s been “a number of meetings with governors hosted by President Biden and Vice President Harris on COVID response that are well-documented in media reports over the last year.”

According to Gage, however, Ricketts “was never invited to these other calls or meetings.”

Pushaw questioned Biden’s engagement outside of the calls, too.

“If this is indeed the case, our office has not been informed of all these meetings,” she said. “Could it be that the Biden Administration is only interested in dialogue with governors who agree with their heavy-handed, coercive, ineffectual COVID-19 policies?”

The Epoch Times was able to verify that two meetings between Biden and governors have taken place, one in February with at least four from Arkansas, Maryland, New York, and New Mexico; and one in May with those from Ohio, Maine, Massachusetts, Minnesota, Utah, and New Mexico.

Ricketts said the administration could benefit from more state feedback.

“I don’t believe the president or the vice president really know what’s going on with regard to the pandemic and I think this is demonstrated by some of the things that the president says,” he said.

As an example, he mentioned Biden’s school reopening comments, which set the benchmark so low it likely would have been achieved by doing nothing, as well as Biden’s remarks that Americans could possibly get together to celebrate Independence Day earlier this year if efforts to curb the pandemic went well.

“We were doing that a year ago,” Ricketts noted.

In his view, Biden “doesn’t really understand how different parts of the country have different experiences with regard to this pandemic.”

The result is a “one-size-fits-all, cookie-cutter” COVID-19 policy coming out of the White House, he said.

If Biden, for instance, directly engaged with the governors on vaccine rollout, “it could have been more effective,” he said.

The White House could have also approached differently its decision to increase federal control over monoclonal antibody treatment if he heard about its impact directly from states, he said.

This particular issue was highlighted by Noem’s office as well.

“It is clear that the Biden White House does not care about concerns that states have,” Fury said.

The NGA and 45 other governors didn’t respond to requests for comment.

A spokeswoman for Republican Indiana Gov. Eric Holcomb said via email she would “have to look into this,” without providing further information.