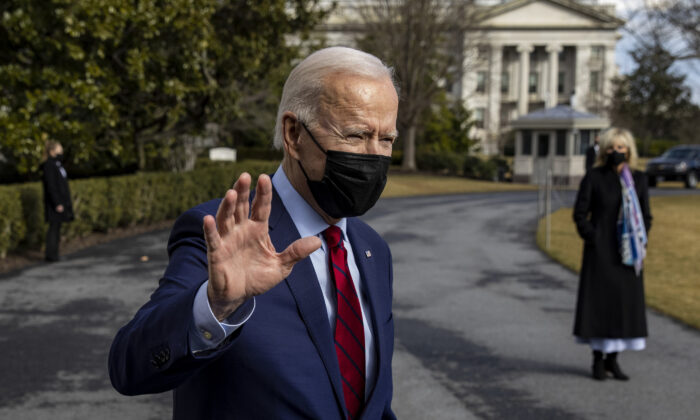 President Joe Biden speaks to the media at the White House before he walks to Marine on the south lawn on Feb. 27, 2021 in Washington. (Tasos Katopodis/Getty Images)
Politics

The Biden administration isn’t releasing the names of those attending its White House virtual meetings, despite recent calls from political groups calling for more transparency.

While the White House has previously committed to releasing in-person visitor logs, virtual meetings have since become the main mode of interaction amid the CCP (Chinese Communist Party) virus pandemic.

“Virtual meetings will not be subject to release—in the same way that previous administrations didn’t release phone logs—but we’re planning on regularly releasing the attendee lists for in-person meetings at the White House,” the official told the outlet on March 1.

Biden administration officials didn’t immediately respond to a request by The Epoch Times for comment.

There have been other critiques related to transparency: The schedules for Biden and Vice President Kamala Harris aren’t posted online, the White House comment line is shut down, and there are no citizen petitions on the White House’s website, Politico reported.

When asked if the details of virtual meetings would be disclosed, White House press secretary Jen Psaki told reporters during a Feb. 2 briefing, “At this point, there’s not a discussion of making virtual meetings a part of what’s released.”

The Biden administration has vowed to be transparent. Psaki said on Jan. 20 that Biden plans to “bring transparency and truth back to the government to share the truth, even when it’s hard to hear.” Psaki also told reporters in her first briefing that she has a “deep respect for the role of a free and independent press in our democracy.”

In recent months, more than a dozen organizations and political transparency groups have been putting pressure on the administration to disclose information relating to its virtual logs and other information.

One such group, called “Open the Government,” sent a letter to the White House in February calling on the administration to “change course and immediately begin preparing virtual visitor logs for public release.”

“All visitor logs—whether for in-person visits or the virtual meetings that have replaced them during the pandemic—should be made available online in a searchable, sortable, downloadable database that includes the name and affiliation of each visitor, the date of the visit, the name of the person being visited, and a general description of the reason for the visit,” the letter states.

More than a dozen other transparency and ethics organizations signed the letter, which was delivered to White House legal counsel Dana Remus.

Open the Government also requested a meeting with the administration “to discuss additional presidential records-related recommendations many of our organizations made in our Accountability 2021 agenda and elsewhere.”

Some of the recommendations include restricting the use of disappearing message apps for government business, and of modernizing records management systems.