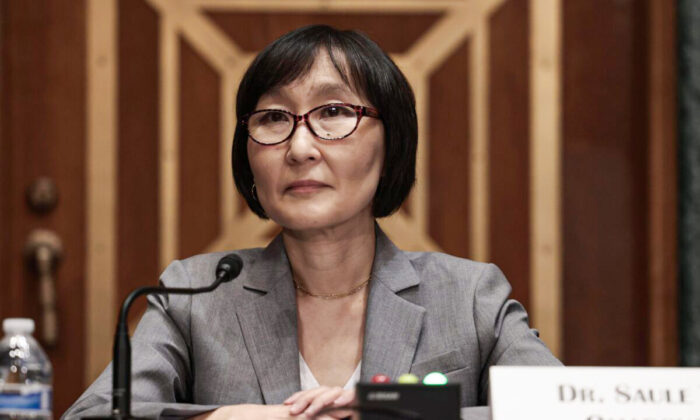 Saule Omarova is seen during her nomination hearing to be the comptroller of the currency with the Senate Banking, Housing and Urban Affairs Committee on Capitol Hill on Nov. 18, 2021. (Anna Moneymaker/Getty Images)
By Zachary Stieber

President Joe Biden’s pick for a top banking regulation position was withdrawn on Tuesday after strong pushback from Senate Republicans and several Democrats.

Saule Omarova, a professor at Cornell Law School, drew criticism for her proposals to dramatically centralize banking and her thesis on Karl Marx, widely seen as the founder of communism.

Biden said in a statement that Omarova asked him to withdraw her nomination to be comptroller of the currency and he agreed to do so.

“As a strong advocate for consumers and a staunch defender of the safety and soundness of our financial system, Saule would have brought invaluable insight and perspective to our important work on behalf of the American people,” the Democrat said, before accusing detractors of launching “inappropriate personal attacks” against his nominee.

Omarova did not say why she made the request in a letter released by the White House, besides describing it as “no longer tenable” for her to continue as a Biden nominee.

Sen. Pat Toomey (R-Pa.), the top Republican on the Senate Banking Committee, had noted that Omarova herself called her proposals radical. In writings, she has expressed a desire to “effectively ‘end banking’ as we know it,” and let the Federal Reserve set prices for food and energy.

“During the confirmation process, a bipartisan consensus emerged that Professor Omarova’s self-proclaimed radical ideas for America’s financial system were not suitable for our nation’s top banking regulator. I hope the Biden administration will select a nominee with mainstream views about the American economy,” Toomey said Tuesday.

“Saule Omarova is a radical who shares her Marxist views freely and in writing. She wants big-government bureaucrats to dictate the terms of America’s economy. Putting her in charge of America’s banks would have been disastrous for American workers and families,” added Sen. John Kennedy (R-La.).

Omarova told the hearing she is not a communist and tried distancing herself from her writings.

The comptroller is a Senate-confirmed position. The Senate is currently divided 50-50. Democrats can break ties through Vice President Kamala Harris. Any Democrat defections would likely have doomed Omarova.

Biden previously withdrew the nominations of Neera Tanden to head the White House Office of Budget and Management and David Chipman to run the Bureau of Alcohol, Tobacco, Firearms and Explosives.