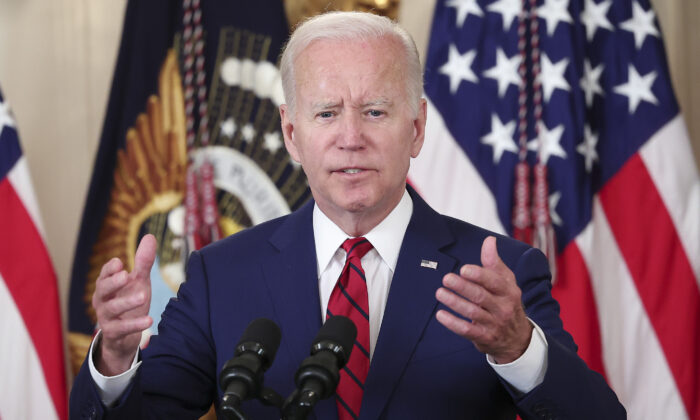 Biden: ‘We Need More Money to Plan for the Second Pandemic’

President Joe Biden said his administration needs more funding for not just COVID-19 vaccines, but to plan for another pandemic.

“We have to think ahead,” he said, adding that is “why we need the money.”

Biden was making those comments as COVID-19 vaccines rolled out for children as young as 6 months after both the Food and Drug Administration (FDA) and Centers for Disease Control and Prevention (CDC) authorized Pfizer’s and Moderna’s vaccines.

Some municipalities announced over the weekend that those vaccines will be administered starting Tuesday. Monday was a federal holiday.

With the latest vaccine rollout Tuesday, Biden said there is “finally, some peace of mind” and described it as a “monumental step forward” in his administration’s COVID-19 response.

What the Data Shows

Federal data suggest that since October 2021, only about 29 percent of children aged 5 to 11 are considered fully vaccinated after the Pfizer vaccine was authorized. About 36 percent in that age group have received one dose.

Meanwhile, studies have also shown that children and especially young children have exceptionally low mortality and hospitalization rates compared with other groups. In general, elderly and individuals with compromised immune systems are the most at risk from COVID-19.

Some polls targeting parents of small children show that the vast majority of those parents do not their kids to receive the shots despite some mainstream news outlets and health officials claiming that parents are “eagerly anticipating” the rollout.  In May, a Kaiser Family Foundation poll showed that only 18 percent of American parents with very young children were planning on having them receive the shots.

Among the states, Florida is the only one to not place any orders for COVID-19 vaccines for children under the age of 5, according to Gov. Ron DeSantis’s spokeswoman Christina Pushaw. On June 20, DeSantis doubled down and told a crowd that his office is recommending against “vaccinating babies.’

“We are not going to have any program where we’re trying to jab 6-month-old babies with mRNA. That’s just the reality,” the Republican governor said. “Our Department of Health has looked at it. There is no proven benefit to put a baby on mRNA, so that’s why our recommendation is against it,” he added.