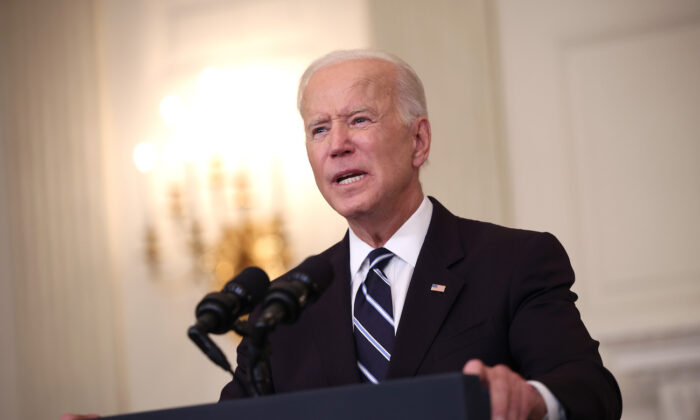 President Joe Biden said his administration will work to get the U.S.-Mexico border crisis “under control” as thousands of illegal immigrants from Haiti have amassed near a bridge in Del Rio, Texas.

“We will get it under control,” Biden said twice in response to questions regarding the border crisis, where more than 14,000 illegal immigrants are camping near the bridge. The president didn’t elaborate.

Biden made the comment to a reporter after speaking at the U.N. General Assembly on Tuesday morning. The president was walking through a press area when the question was asked, and Biden responded while walking into another room.

It comes as more than 6,000 Haitians and other illegal aliens had been removed from an encampment at Del Rio, Texas, U.S. officials said Monday. Those officials said they are immediately expelling some illegal aliens back to Haiti, as some Mexican authorities were detaining some illegals on the Mexico side of the border, according to The Associated Press journalists on the scene.

Department of Homeland Security Secretary Alejandro Mayorkas and other administration officials urged illegal immigrants not to try and enter the United States.

“If you come to the United States illegally, you will be returned. Your journey will not succeed, and you will be endangering your life and your family’s life,” Mayorkas said.

The burgeoning immigration crisis along the border could prove costly for Biden and Democrats. Republicans have pointed to dozens of executive orders signed by the president since he took office in January, including an attempt to overturn the “remain in Mexico” policy that was later reversed by a judge earlier this summer as well as suspending construction of the border wall.

During a Senate hearing on Tuesday morning, the DHS secretary was pressed about the Biden administration’s response to the crisis. In an exchange with Sen. Ron Johnson (R-Wisc.), Mayorkas responded to a question about whether the borders are closed, in which he stressed that they were.

But Johnson, a member of the Senate Homeland Security Committee, told Mayorkas that “we were serious about border security until your administration took office” and that Mayorkas had “stood before this committee and said you would enforce the laws. You have not done that.”

“Every time you come before this committee, you always say it’s going to get better,” Sen. Josh Hawley (R-Mo.) said during the hearing of illegal border crossings during the Biden administration.

He added: “And then every time you leave, it gets worse and worse. This is a humanitarian crisis in Del Rio. You can spin it whichever way that you want, but … we should not minimize the humanitarian conditions for which, frankly, you’re responsible. … tens of thousands of people living in conditions that are startling, startling, brought here because of your policies.”