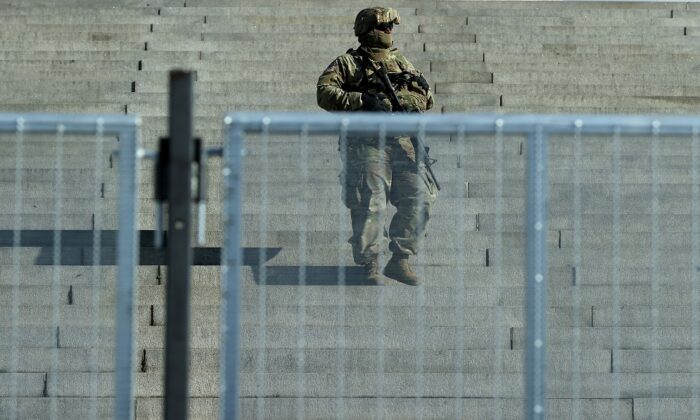 A member of the National Guard watches as President Joe Biden's motorcade drives to Arlington National Cemetery for a wreath-laying ceremony at Tomb of the Unknowns after the 59th Presidential Inauguration ceremony at the Capitol, in Arlington, Va., on Jan. 20, 2021. (Chip Somodevilla/Getty Images)
Viewpoints

We’ve been hearing a lot about the Biden administration’s planned “domestic war on terror”—or perhaps it’s really a “war on domestic terror.”

Cynics—that would be dogs like me—say that what we are really seeing is a war on political opposition.

Well, we still have thousands of National Guard troops in Washington, D.C. Why?

And why were some 26,000 troops from all across the country assembled there in the first place? And why were they subjected to loyalty tests, with several troops known to be critical of the new administration sent packing.

The rationale offered was to protect the inaugural proceeds following the Jan. 6 protests at the Capitol.

But he didn’t. He asked the crowd to march over to the Capitol “peacefully and patriotically.” Should he have known better? Yes.

Are the media talking out of both sides of their mouths, ignoring the arson and destruction in cities across the country when it is perpetrated by the left, while acting like the party of law and order when “mostly peaceful” protestors cut up rough in the Capitol? Again, yes.

So turning Washington into an armed camp was mostly a bit of theater. There was no threat that the Washington police couldn’t have handled.

It was theater. It was also a show of force.

“We’re in charge now, rubes, and don’t you forget it.”

Which is the real reason that some 7,000 of those troops will be staying in D.C. until mid-March.

Some say it’s in order to keep the peace during the new impeachment proceedings in the Senate against Trump, which are scheduled to commence early next month.

But why is Trump being impeached yet again? Ostensibly for “willfully inciting violence against the Government of the United States.”

Really, it’s for being Trump, i.e., for being a threat to the status quo.

Of course, it’s odd to impeach someone when he is no longer in office. But it has been pointed out that if Trump is convicted, he can then be forbidden from any future “public trust,” i.e., political office.

Maybe that’s in the back of the minds of those pushing this spectacle. Trump is the greatest threat in history to the credentialed class and the globalist administrative state upon which they feed.

For the media, Trump has been their greatest source of revenue in decades; impeaching him again will assure that he stays in the news.

Demonizing Half the Country

Which brings me back to that “war on domestic terror.”

There is no domestic terror.

But there is plenty of domestic conservatism.

That’s the real focus of this war.

To get a flavor of the mood in the war camp, ponder the open letter, signed by more than 500 “publishing professionals” (authors, publishers, designers, and so on), calling on the industry to reject books written by anyone who had anything to do with the Trump administration.

They pledge to “do whatever is in our power” to stop “enriching the monsters among us.”

Here’s their problem. There are approximately 75 million people who voted for Trump.

How many million more was that than voted for Joe Biden? I don’t know. Anyone who does know isn’t saying.

But the point is this. The activist left—that would be the people who were burning cities this past summer, the people who installed Biden and Kamala Harris in office, the people who formulated the Green New Deal, and its attendant craziness—think they can demonize half the country with no consequences for themselves.

This isn’t a correct conclusion, I believe. But it also isn’t irrational.

I say that it’s not irrational because hitherto, everything the left has done has been excused. They burn down various cities, while the media describes the mayhem as “mostly peaceful” protests, when really they are deadly assaults on the fabric of our civilization.

But the left proceeds with impunity because conservatives are unwilling to behave reciprocally and treat the left with the no-holds-barred contempt that has also been part of the left’s playbook.

Keeping the Bullies in Line

Is that about to change? Probably not.

But maybe. Biden has spoken about “unity” and “tolerance,” even as his actions foster divisiveness and intolerance.

Many people have noticed this.

It’s all part of a calculated playbook. The Washington Post began talking about impeaching Trump 19 minutes after he was inaugurated in 2017. Rep. Marjorie Taylor Greene (R-Ga.) waited a full 24 hours before filing articles of impeachment against Biden.

She has a good case: the Biden family’s corrupt dealings with communist China and Ukraine. I don’t think she mentioned the $3.5 million that Hunter Biden got from the richest woman in Russia, but that, too, bears looking into.

Will Greene’s initiative go anywhere? Probably not. But we may hope that it will start a fertile precedent.

I think Biden should be impeached early and often, for canceling the Keystone pipeline, for example. It put thousands of people out of work and, since it attacks a critical basis for U.S. prosperity, it’s a threat to national security. It also gives effective aid and comfort to America’s enemies, above all to Iran, China, and Russia.

Furthermore, since the Democrats are proceeding with their impeachment of Trump even though he is out of office, should Republicans not move to impeach Barack Obama for his role in the Russia collusion hoax? For refusing to do anything to help Ambassador Chris Stevens and his security detail during the attack against our consulate in Benghazi in 2012? For refusing to enforce federal immigration laws or illegally intervening in various states to prevent them from enforcing their own immigration laws?

The possibilities are endless, and the Democrats have just demonstrated that being out of office is no protection against impeachment.

I say, have at it. It’s a slightly updated version of the Golden Rule: Do unto others as they have done unto you. It’s the only way to keep the bullies in line.