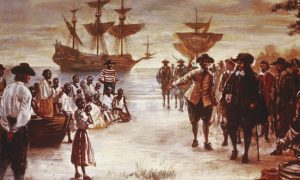 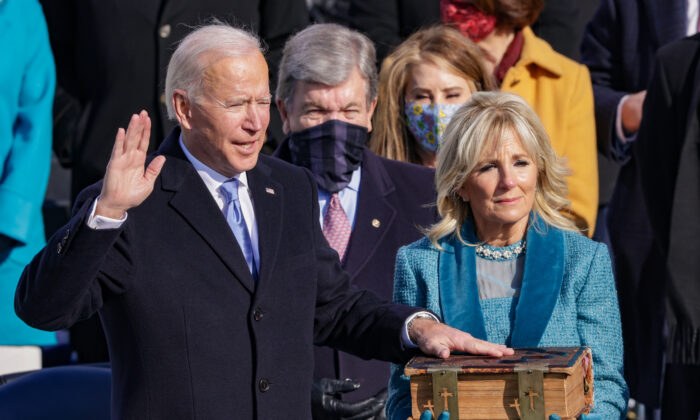 Joe Biden is sworn in as U.S. president during his inauguration on the West Front of the U.S. Capitol in Washington on Jan. 20, 2021. (Alex Wong/Getty Images)
Executive Branch

President Joe Biden plans to cancel the Trump administration’s 1776 Commission, only two days after the advisory panel released a report calling for a U.S. history education centered on the nation’s founding principles.

Biden, who was inaugurated on Wednesday, is expected to sign 17 executive actions, according to a press release. A number of those actions are a direct reversal of Trump-era policies, including the travel ban on seven predominantly Muslim countries, the construction of barriers along the U.S.-Mexican border, and the 1776 Commission to promote a “patriotic education.”

Through his day 1 executive order, Biden will “rescind the Trump administration’s 1776 Commission,” which “has sought to erase America’s history of racial injustice,” the Biden-Harris transition team said in a press release.

Formed last September by then-President Donald Trump, the 1776 Commission is commonly seen as a direct response to New York Times’ 1619 Project, which portrays the United States as an inherently racist nation. The Pulitzer Prize-winning project consists of a collection of essays that argue, among many other controversial claims, that the primary reason for the American Revolution was to preserve slavery.

The commission, led by a number of prominent scholars including Larry Arnn, Victor Davis Hanson, and Charles Kesler, released its first report (pdf) this Monday. The report calls for a “national renewal” of education to teach future U.S. citizens the founding principles enshrined in the Declaration of Independence and the Constitution, and identified historical and modern challenges to those key principles.

“Neither America nor any other nation has perfectly lived up to the universal truths of equality, liberty, justice, and government by consent,” the report reads. “But no nation before America ever dared state those truths as the formal basis for its politics, and none has strived harder, or done more, to achieve them.”

U.S. colleges and universities, the report warns, have become “hotbeds of anti-Americanism, libel, and censorship,” with the intention to “manipulate opinions more than educate minds.”

The 1776 report specifically calls out historian Howard Zinn and the 1619 Project for preventing students from seeing the humanity, goodness, and benevolence in America’s historical figures. Young readers are instead being presented with a distorted version of U.S. history, according to the 1776 report.