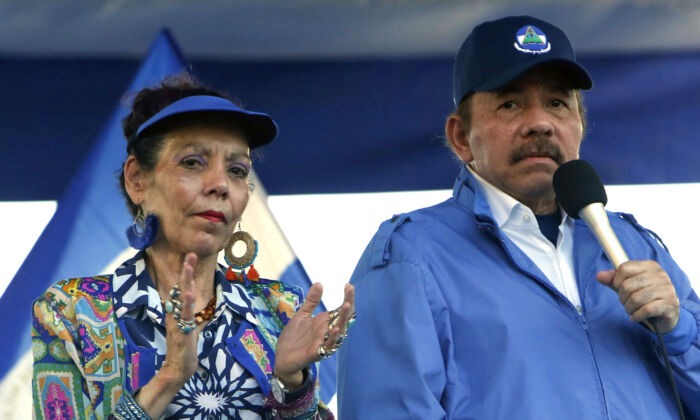 The Biden administration threatened sanctions against Nicaragua after longtime leader Daniel Ortega secured a fourth term in an election that observers say was a sham.

In statements released by the White House, President Joe Biden said Ortega, a former Marxist guerrilla fighter, and Ortega’s wife and running mate—Rosario Murillo—”orchestrated” a “pantomime election that was neither free nor fair, and most certainly not democratic.”

“The arbitrary imprisonment of nearly 40 opposition figures since May, including seven potential presidential candidates, and the blocking of political parties from participation rigged the outcome well before Election Day,” Biden’s statement reads. “They shuttered independent media, locked up journalists and members of the private sector, and bullied civil society organizations into closing their doors.”

Secretary of State Antony Blinken, meanwhile, said that the United States will use a variety of tactics to place pressure on the Ortega government.

“We will continue to use diplomacy, coordinated actions with regional allies and partners, sanctions, and visa restrictions, as appropriate, to promote accountability for those complicit in supporting the Ortega–Murillo government’s undemocratic acts,” he said on Nov. 8.

Several unidentified U.S. officials told Reuters last week that the Biden administration is already preparing sanctions against Ortega, Murillo, and other top Nicaraguan officials. And days before that, the House of Representatives, by a 387–35 vote, approved a measure that would implement more sanctions.

The Biden administration appears to be following a similar script as the Trump administration in dealing with Latin American regimes. Former President Donald Trump placed Venezuela under significant sanctions after saying socialist leader Nicolas Maduro engaged in election fraud to keep himself in power, and the United States recognized opposition leader Juan Guaido as president of Venezuela.

Following Ortega’s victory, Russian officials said they would stand behind him and told the United States to recognize the election results.

“As far as I understand, just yesterday in the evening, when the voting was over, the White House declared its refusal to recognize the election and called on other countries to do the same. We consider it inadmissible and strongly condemn such a policy,” Russian Foreign Minister Sergey Lavrov said on Nov. 8, according to the TASS news agency.

Nicaragua’s Supreme Electoral Council said that with nearly all the ballots counted, Ortega had won more than 75 percent of the vote. The outcome was never in doubt after his government jailed seven of the leading potential opposition candidates, clearing the field for Ortega to sweep to a fourth consecutive five-year term.