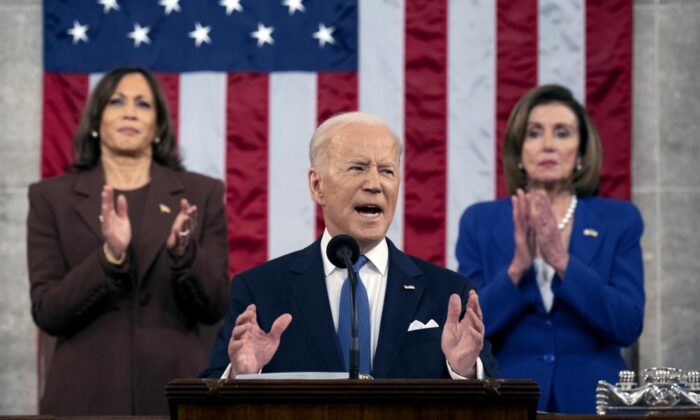 President Joe Biden delivers his State of the Union address to a joint session of Congress at the Capitol in Washington on March 1, 2022. (Saul Loeb/Pool via AP)
Viewpoints

There was a great deal of disinformation to comb through—not to mention repeated gaffes and garbled speech—in the 7,900 or so words of President Joe Biden’s hour-long State of the Union address to Congress on March 1.

Whether it was the far-fetched notion that his administration over a course of months had “prepared extensively and carefully” for Vladimir Putin’s invasion of Ukraine; his giving the false impression that releasing 30 million barrels of oil from the U.S. Strategic Petroleum Reserve will mean sustained relief for consumers from rising gasoline prices; his assertion that his top priority is “getting prices under control” and that a “tax credit to weatherize your home” paired with the subsidizing of solar, wind, and electric cars will be the solution to the worst inflation in four decades; plus lots more—Biden gave media fact-checkers a lot of work to do.

Less noticed, however, was the president’s regurgitation of a shameless claim that his economic policies are “demanding more competition” within America’s private sector. “I’m a capitalist,” Biden said, a protest-too-much catchphrase he has repeated over many speeches. One labor activist declares that “Biden has been—without question—the most aggressively pro-union president since FDR died in office in 1945.” This reincarnation of Franklin D. Roosevelt is supposedly waging a battle against “capitalism without competition.”

In fact, Biden is at war with competition and is arguably the most committed monopolist ever to occupy the Oval Office—where he replaced George Washington’s image above the fireplace (a bipartisan constant across countless presidencies) with that of Roosevelt, the president whom Democratic Party icon Al Smith in 1936 accused of being a socialist autocrat who betrayed his own 1932 party platform. It is little known, and never taught in public school history classes covering the New Deal, that that platform called for “immediate and drastic reduction of governmental expenditures by abolishing useless commissions and offices, consolidating departments and bureaus, and eliminating extravagance to accomplish a saving of not less than 25 per cent in the cost of the Federal Government”—the polar opposite of the revolutionary expansion of government undertaken by FDR.

Not unlike the FDR bait and switch, Biden was presented to the electorate as a safe, avuncular, middle-of-the-road return to normalcy to replace the noise of Donald Trump’s presidency. But upon taking office, Barack Obama’s vice president swiftly put into motion more executive orders than Trump, Obama, or George W. Bush. They included canceling the Keystone XL Pipeline; revoking numerous regulatory relief actions initiated by Trump; directing the Department of Transportation to require that airlines refund baggage costs on delayed flights and make owners of railroad tracks give right of way to passenger trains; and ending the federal government’s contracts with private prisons (which the left concludes is a failed experiment despite over 90 percent of U.S. prisoners being held in public facilities).

Biden is unleashing federal antitrust regulators on the false assumption that “big is bad,” an idea that is the relic of the pre-high-tech economy of the early 2oth century. Contrary to his contentions, “big” often means lower prices, as the eager customers of eBay, with its nearly $32 billion capitalization, will attest. Not to mention customers of Amazon, at $1.5 trillion capitalization.

There may be much trepidation today over Amazon purchasing MGM, and the fear of the transaction spawning an unstoppable multi-media leviathan, but the same fears abounded when AOL bought Time Warner more than two decades ago. Far from a new monopoly smothering competition, AOL was spun off and bought by Verizon a few years later, and AT&T ultimately took over Time Warner.

It’s a flight of fancy that we need more powerful bureaucrats for there to be a truly competitive economy. And the result of taking that tack can often be the opposite of the federal government’s noble anti-trust intentions.

As Kimberly Strassel of The Wall Street Journal has pointed out: “The Justice Department for years waged a war against Apple and its deals with book publishers. Guess what that did? It helped make Amazon the most dominant player in eBooks—this company that we’re now wringing our hands over in terms of their own proposed buy of MGM. So we can have unintended consequences here.

“If you look at the long history of some of these antitrust campaigns by the government … that is more often the outcome than any better competition that they originally aimed for.”

“Happy warrior” Smith, a lifelong resident of Manhattan’s Lower East Side and probably the only authentic member of the working class ever to be nominated president by a major party, warned of the danger of “the vast building up of new bureaus of government, draining the resources of our people into a common pool and redistributing them, not by any process of law but by the whim of a bureaucratic autocracy.”

Under the guise of fostering competition, and with the real aim of promoting the interests of organized labor and “the appeal to passion and prejudices that comes from the demagogues that would incite one class of our people against the other”—another danger Smith warned of—Biden is empowering the worst monopoly of all: big, unwieldy, unaccountable government.