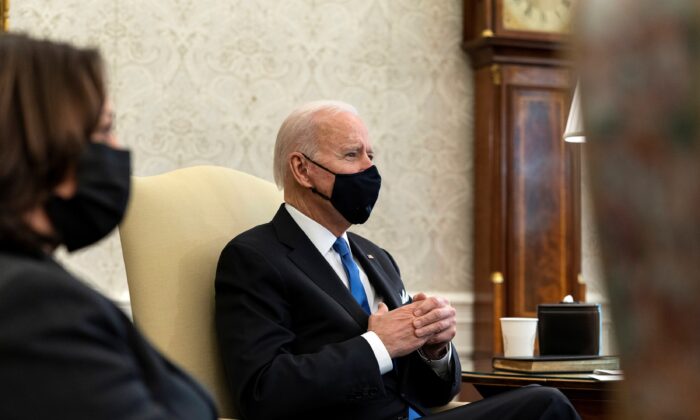 President Joe Biden was sued by 12 states over a climate change-related executive order, saying it has the potential to severely affect states’ economies.

“Manufacturing, agriculture, and energy production are essential to Missouri’s economy and employ thousands of hard-working Missourians across the state. Under President Biden’s executive order, which he didn’t have the authority to enact, these hard-working Missourians who have lived and worked this land for generations could be left in the dust,” Schmitt, a Republican, said in a March 8 statement.

The lawsuit challenges Biden’s Executive Order 13990, titled “Protecting Public Health and the Environment and Restoring Science to Tackle the Climate Crisis,” and accuses the Biden administration of not having sufficient authority to issue binding numbers on the “social costs of greenhouse gases” in federal regulations.

“From higher energy bills to lost jobs, this massive expansion of federal regulatory power has the potential to impact nearly every household in this state—that’s why today, I’m leading a coalition of states to put a stop to this executive order and protect Missouri families,” said Schmitt.

The suit argues that Biden’s order could inflict trillions of dollars of damage to the U.S. economy, while saying that the executive order threatens the Constitution’s separation of powers doctrine.

“In practice, this enormous figure will be used to justify an equally enormous expansion of federal regulatory power that will intrude into every aspect of Americans’ lives—from their cars, to their refrigerators and homes, to their grocery and electric bills,” the lawsuit reads (pdf).

According to the White House, Biden’s Jan. 20 order is designed to “promote and protect our public health and the environment” as well as “conserve our national treasures and monuments.”

“Where the Federal Government has failed to meet that commitment in the past, it must advance environmental justice,” the order stated. “In carrying out this charge, the federal government must be guided by the best science and be protected by processes that ensure the integrity of Federal decision-making. ”

The order directed all federal agencies and departments to review and “take action” to address the Trump administration’s climate-related executive orders.

The lawsuit was filed on March 8 in federal court in the Eastern District of Missouri.