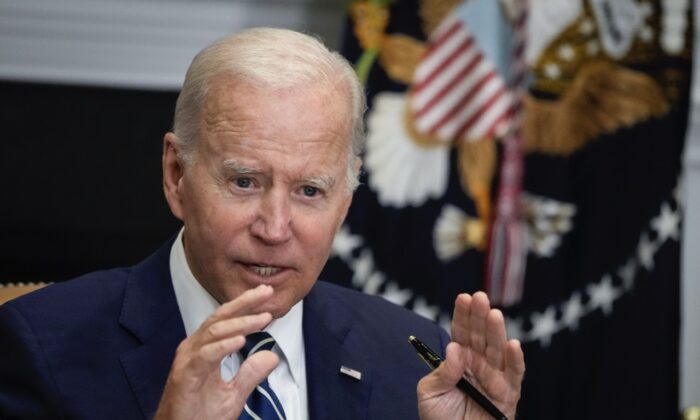 President Joe Biden in the Roosevelt Room of the White House in Washington on June 23, 2022. (Drew Angerer/Getty Images)
Executive Branch

President Joe Biden on June 25 signed into law the biggest gun control measure introduced in the United States in decades, after the bipartisan bill cleared both houses of Congress.

“I was there 30 years ago, the last time this nation passed meaningful gun safety laws, and I’m here today for the most significant law to be passed since then,” Biden said at a June 25 press conference at the White House.

The legislation, called the Bipartisan Safer Communities Act, passed the House on June 24 in a 234–193 vote following Senate approval a day earlier.

Key provisions of the bill include expanding federal background checks for buyers between the ages of 18 and 21, adding incentives for states to adopt so-called red flag laws, expanding access to mental health programs, and enhancing school security in a bid to prevent mass shootings.

“While this bill doesn’t do everything I want, it does include actions I’ve long called for that are going to save lives,” Biden said.

The legislation comes on the heels of mass shootings in Buffalo, New York, which left 10 people dead, and Uvalde, Texas, where 21 people were fatally shot, including 19 children. Both gunmen were 18 years old.

“At a time when it seems impossible to get anything done in Washington, we are doing something consequential,” the president said.

The National Rifle Association (NRA) reacted to Biden’s signing of the bill in a post on Twitter: “Make no mistake, behind the façade and the contrived talking points of safety, school security, and mental health, THIS IS A GUN CONTROL BILL.”

The NRA earlier stated its opposition to the measure, arguing that it “does little to truly address violent crime while opening the door to unnecessary burdens on the exercise of Second Amendment freedom by law-abiding gun owners.”

Gun Owners of America, another gun lobby, said in a statement on Twitter that it “will challenge these unconstitutional laws in court to defend the rights of all Americans.”

The bill would provide around $15 billion over the next five years toward expanding access to mental health programs and enhancing school security in a bid to prevent future mass shootings.

The legislation would require additional juvenile records checks for 18- to 21-year-old individuals who are seeking to buy a gun.

It would also close the so-called “boyfriend loophole.” Under the measure, convicted domestic abusers would be barred from buying guns if their victim is their romantic partner or a recent former romantic partner.

The bill will also help provide $750 million in funding as an incentive to enforce red flag laws in the 19 states and the District of Columbia that have them, making it easier to temporarily confiscate guns from people deemed a danger to themselves or others.

The measure also adjusts language in the current law so that people who regularly buy and sell guns “to predominantly earn a profit” are required to register as a federal firearm licensee. With this designation, these gun sellers would be required to run background checks for transactions.

The gun control package would also strengthen penalties for gun trafficking and straw purchases, including fines and up to 15 years in prison for violators.

Joseph Lord and Mimi Nguyen-Ly contributed to this report.