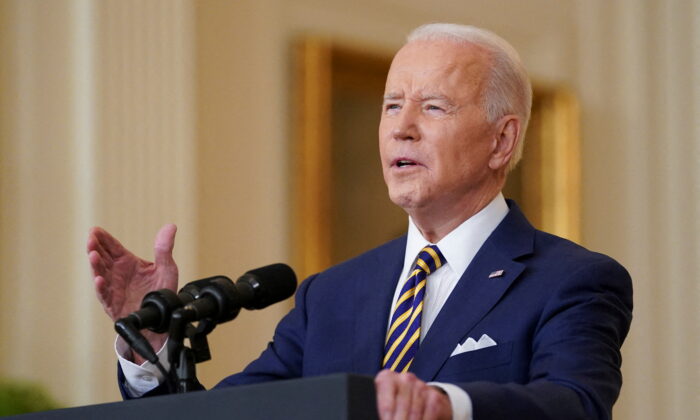 President Joe Biden holds a news conference in the East Room of the White House in Washington on Jan. 19, 2022. (Kevin Lamarque/Reuters)
Executive Branch

President Joe Biden cast doubt on the legitimacy of the upcoming midterm elections during a press conference on Wednesday.

Biden, a Democrat who is about to hit one year in office, was asked whether the upcoming election will be conducted fairly and the results legitimate if the Democrats’ bill attempting to federalize elections isn’t passed.

“It all depends on whether or not we’re able to make the case to the American people that some of this is being set up to try to alter the outcome of the election,” Biden said.

Biden noted that voter turnout hit record highs for the 2020 presidential election and then claimed that some states were trying to make it hard for minorities to vote.

“I think, if in fact, no matter how hard they make it for minorities to vote, I think you’ll see them willing to stand in line and defy the attempt to keep them from vote. People will show up and make the sacrifice that needs to be made in order to change the law back to what it should be,” Biden said.

Pressed on the point later, Biden said the elections “easily could be illegitimate.”

Congressional Democrats have been trying to pass a bill that would move some election oversight to the federal government. The House of Representatives approved the measure last week, but there isn’t enough votes in the 50-50 Senate because several Democrats opposite it in addition to virtually all Republicans.

Sen. Joe Manchin (D-W.Va.), one of the detractors, told reporters this week that federal law already protects voters’ rights and that the government will make sure voters have a right to vote.

Some states have passed laws on voting since the last election. The laws are primarily aimed at making sure votes are cast legitimately, but have been panned by critics as adding barriers.

The Georgia election bill, for instance, required the creation of a hotline where residents can report suspicious election activities and voter suppression while mandating dropboxes be secured inside buildings.

Biden, who has described such laws as “racially discriminatory,” drew quick criticism from Republicans with his comments casting doubt on the upcoming elections.

“President Biden continues to make baseless claims about ‘voter suppression’ conspiracies across the country. The facts DO NOT back him up! Turnout in Atlanta’s 2021 mayoral election INCREASED 17% after the enactment of the new Georgia voting law compared to 2017,” added Rep. Jody Hice (R-Ga.).