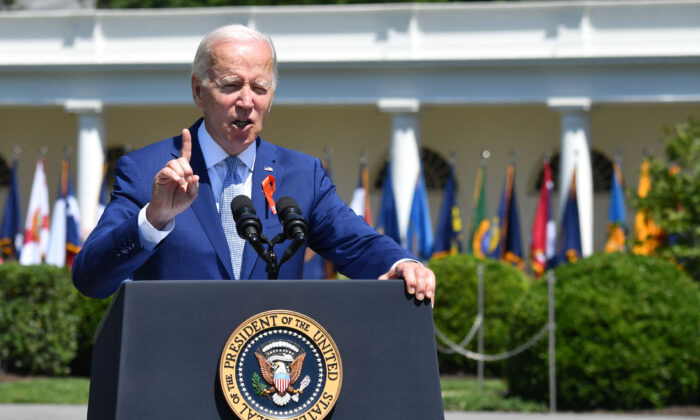 President Joe Biden speaks during an event commemorating the passage of the Safer Communities Act at the White House in Washington on July 11, 2022. (Nicholas Kamm/AFP via Getty Images)
By Jack Phillips

President Joe Biden on Monday said he wants to implement a new ban on “assault weapons” as he touted the Safer Communities Act at the White House.

“We’re living in a country awash in weapons of war,” Biden said, apparently referring to AR-15-style rifles. “What is the rationale for these weapons outside war zones?”

“Assault weapons need to be banned,” Biden added as he signed the measure into law. “They were banned. I led the fight in 1994. And then under pressure from the [National Rifle Association] and the gun manufacturers and others, that ban was lifted in 2004.”

On Monday, Biden also said he wants to ban “high-capacity magazines,” which generally refers to magazines that carry more than 10 rounds.

“I’m determined to ban these weapons again and high capacity magazines … I’m not going to stop until we do it,” added Biden, who backed the 1994 Assault Weapons Ban.

Last month, 15 Republican senators joined all Democrats to pass the Safer Communities Act, which includes federal funding to enforce red flag laws, implements more stringent background checks for gun buyers between the age of 18 and 21, and makes obtaining guns through straw purchases a federal offense. The law also bars individuals from obtaining a firearm for at least five years if they’ve been convicted of a misdemeanor crime involving a domestic partner.

The NRA wrote that “make no mistake, behind the façade and the contrived talking points of safety, school security, and mental health, THIS IS A GUN CONTROL BILL,” adding that it “does little to truly address violent crime while opening the door to unnecessary burdens on the exercise of Second Amendment freedom by law-abiding gun owners.”

And Gun Owners of America, another pro-gun group, announced it “will challenge these unconstitutional laws in court to defend the rights of all Americans.”

Meanwhile, in order to reinstate the 1994 ban, Democrats will likely need 10 Republicans to vote with them to overcome the 60-vote threshold to advance most bills. No Republican senator has sought to reinstate that ban, which ended in 2004.