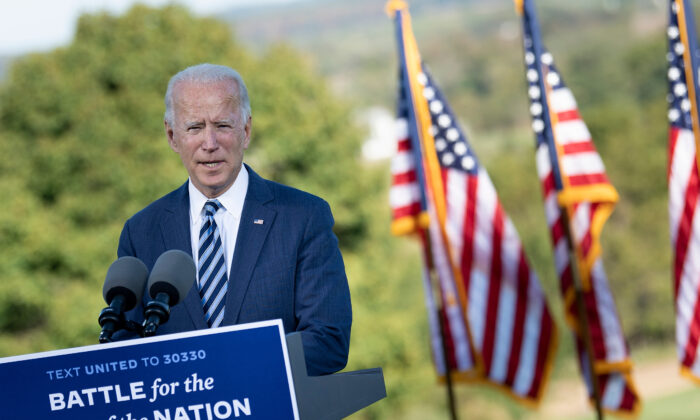 Democratic presidential nominee Joe Biden said he will reveal his position on “packing” the U.S. Supreme Court after the election is over.

“You’ll know my opinion on court-packing when the election is over,” Biden told reporters on Oct. 8 during a campaign event in Phoenix. “It’s a great question, and I don’t blame you for asking. But you know, the moment I answer that question, the headline in every one of your papers will be on the answer to that question.”

Packing the court means expanding the Supreme Court beyond its current nine-seat threshold. Some Democrats have suggested the move if Republicans try to confirm Judge Amy Coney Barrett to succeed Justice Ruth Bader Ginsburg, who died last month, saying it would allow Democrats to nominate liberal justices to the bench.

Harris on Oct. 7 responded to Pence’s questions about court-packing by deflecting to Republicans’ plans to nominate Barrett.

Harris didn’t respond to the claim.

“Whatever position I take in that, that’ll become the issue,” Biden said. “The issue is the American people should speak. You’re voting now. Vote, and let your senators know how you feel.”

In order to pack the Supreme Court, Democrats would have to win the White House and Senate and possibly abolish the Senate filibuster.

In 1937, former President Franklin D. Roosevelt tried to add extra associate justices to force through parts of his New Deal that were ruled unconstitutional.