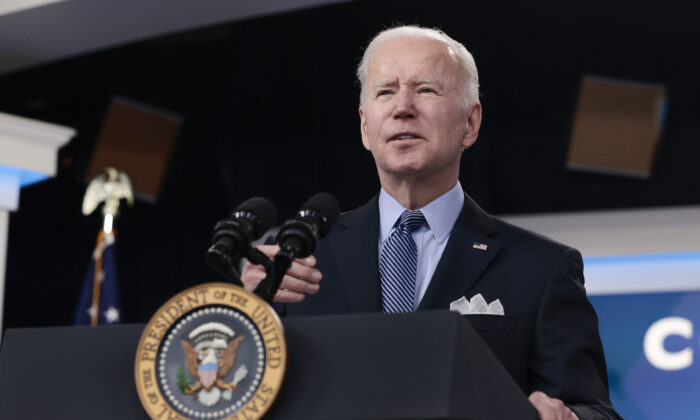 President Joe Biden has said that more gun laws should be passed in Congress after a shooting in Sacramento, California, left at least six people dead and more injured over the weekend.

In response to the shooting, Biden said Congress needs to “ban ghost guns,” although there’s no evidence that a “ghost gun”—an unserialized and untraceable firearm that can be assembled after purchasing components online—was used during the Sacramento incident.

Pro-Second Amendment groups have long said that the term “assault weapon” is intentionally misleading or vague, while others have said that a ban on such weapons would affect nearly all semiautomatic rifles and pistols. Fully automatic firearms haven’t been available for purchase in the United States since 1986, when Congress passed the Firearm Owners Protection Act.

“Repeal gun manufacturers’ immunity from liability. Pass my budget proposal, which would give cities more of the funding they need to fund the police and fund the crime prevention and intervention strategies that can make our cities safer. These are just a few of the steps Congress urgently needs to take to save lives,” Biden also said in response to the shooting.

The state of California is among the states with the strictest gun laws.

The state has already enacted a ban on ghost guns, it requires background checks for all gun sales, it has banned “assault weapons” for decades—which applies to many semiautomatic firearms—and it has a ban on magazines that contain 10 or more rounds. A court in 2019 deemed California’s magazine ban unconstitutional, although that ruling has been placed on hold while the case is being appealed.

California Gov. Gavin Newsom, a Democrat, also reacted to the shooting in the state’s capital city.

“Sadly, we once again mourn the lives lost and for those injured in yet another horrendous act of gun violence,” Newsom said in an April 3 statement. “Jennifer [Newsom’s wife] and I send our heartfelt condolences to the family, friends, and to the wider community impacted by this terrible tragedy.”

Previously, the governor has called for more gun control provisions and in February threw his support behind a measure that would allow California residents to file lawsuits against firearms manufacturers and distributors.

“It’s time to go on the offensive with new measures that empower individuals to hold irresponsible and negligent gun industry actors to account, crack down on shameful advertising that targets our kids, and more,” he said earlier this year.