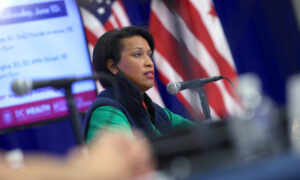 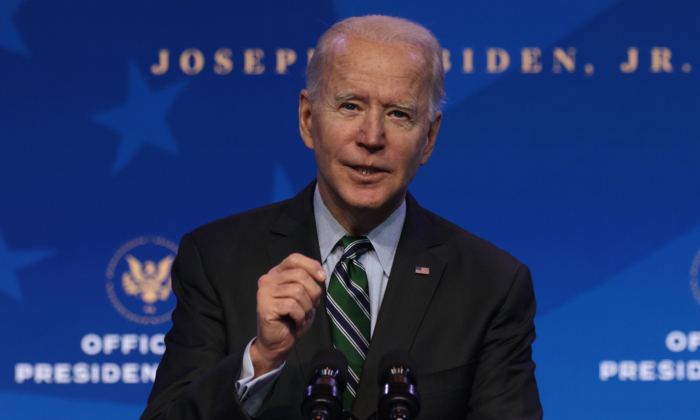 President-elect Joe Biden speaks during an announcement at the Queen theater in Wilmington, Del., on Jan. 16, 2021. (Alex Wong/Getty Images)
Politics

A preview of the executive actions that President-elect Joe Biden will take shortly after assuming the presidency shows that “the racial equity crisis” and the “climate crisis” are among his top four priorities for the first 10 days in office.

“We face four overlapping and compounding crises: the COVID-19 crisis, the resulting economic crisis, the climate crisis, and a racial equity crisis,” according to a Jan. 16 memo by incoming White House chief of staff Ron Klain.

“All of these crises demand urgent action.”

Klain noted that the executive actions will be “bold” but said, “the legal theory behind them is well-founded.”

In his first full week in office, Biden “will take significant early actions to advance equity and support communities of color and other underserved communities,” Klain said. Biden will also move “to address the climate crisis with the urgency the science demands.”

Klain says congressional action will be necessary to deliver on the president-elect’s agenda and cited an immigration bill that Biden will send to Congress on his first day in office.

Last week, Biden introduced his legislative priorities for tackling the CCP virus pandemic. The proposed legislation includes an apparently unrelated mandate for a $15 federal minimum wage, which Congress has estimated will wipe out an estimated 1.3 million jobs. The president-elect plans to introduce his legislative priorities for a CCP virus recovery bill in the coming weeks.

On Inauguration Day, Biden will take roughly a dozen executive actions, including an order for extending a pause of federal student loan payments, rejoining the Paris climate accord, and canceling President Donald Trump’s ban on travel from nations posing a terror threat to the United States.

On the same day, the president-elect will impose a mask mandate on federal property and interstate travel. The mandate is part of Biden’s “100 Day Masking Challenge,” according to the memo. The list of actions on the first day also includes an extension of nationwide restrictions on evictions and foreclosures.

On Jan. 21, Biden’s second day in office, the president-elect “will sign a number of executive actions to move aggressively to change the course of the COVID-19 crisis and safely reopen schools and businesses, including by taking action to mitigate spread through expanding testing, protecting workers, and establishing clear public health standards,” the memo states.

Klain noted that the list of actions isn’t exhaustive, with more actions expected to be added to the to-do list in the coming days.