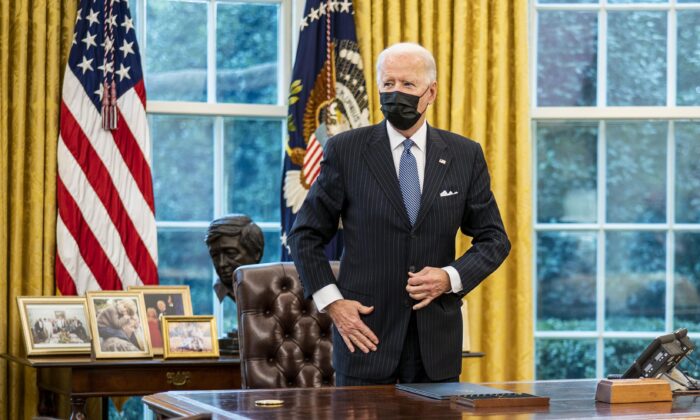 President Joe Biden in the Oval Office of the White House on Jan. 25, 2021. (Doug Mills-Pool/Getty Images)
By Petr Svab

President Joe Biden signed an executive order tasking the government with redefining all its policies and regulations regarding discrimination based on sex to include “gender identity,” which would mean men who identify themselves as women can’t be excluded from using all services and amenities reserved for women.

The order has been welcomed by activists for transgenderism, but critics argue it erodes protections for women and girls. It remains to be seen how the administration interprets the order in specific cases, but the language indicates that women-only sports, bathrooms, and locker rooms at federally funded institutions will have to be open to biological men who consider themselves female and vice versa. That would include all schools and colleges that accept federal dollars.

“Children should be able to learn without worrying about whether they will be denied access to the restroom, the locker room, or school sports,” the order states.

It goes further by infusing “gender identity” into the definition of sex discrimination in housing, workplace, and health care settings.

“Adults should be able to earn a living and pursue a vocation knowing that they will not be fired, demoted, or mistreated because of whom they go home to or because how they dress does not conform to sex-based stereotypes,” the order states. “People should be able to access healthcare and secure a roof over their heads without being subjected to sex discrimination.”

It orders federal agencies to “review all existing orders, regulations, guidance documents, policies, programs, or other agency actions” that pertain to sex discrimination and make changes or issue new regulations to include gender identity.

How exactly the order will play out in practice will depend on how the individual agencies interpret it, in particular, what they will and won’t consider a gender identity.

In general parlance, people usually understand “gender identity” to refer to men, women, and transgender individuals, as in people who choose to live their lives as the opposite sex due to gender dysphoria, the feeling of extreme discomfort with their biological sex.

Yet, the term has evolved into a fluid concept that includes anything one identifies as at a given moment, based on internal feelings.

About 2.1 percent of college students identify themselves as transgender, according to the spring 2020 National College Health Assessment survey (pdf). But only some 0.3 percent identify as transgender male-to-female or female-to-male. For the other 1.8 percent, among the most popular gender identities were “Non-binary,” “Genderfluid,” “Genderqueer,” and “My identity is not listed.”

Online discussions between individuals who consider themselves one of these new genders indicate that not all of them call themselves transgender. Some of them indicate they are, in fact, comfortable with their bodies. A common theme appears to be that their gender identity is unstable. One day, they may consider themselves women, other days as men, androgynous, or something else altogether.

Another common theme is “coming out” to make a statement to the world that they don’t consider themselves to be whatever their biological sex is—to reject to varying degrees the traditional values of biological women playing a feminine role and biological men a masculine one.

That statement often takes a political turn along the lines of the quasi-Marxist “critical gender theory,” which reinterprets human history as a struggle between an oppressive “cis-gender heteropatriarchy” and oppressed “gender non-conforming” individuals.

With Biden’s order, the gender ideology will to some extent become the official policy of the federal government. The consequences will take time to ascertain, but in some areas, they’re already apparent.

No matter how the regulations shake out, it’s clear the order intends to allow men who identify as women to compete in women’s sports, according to Christiana Holcomb, legal counsel for Alliance Defending Freedom, a Christian advocacy group.

This policy has already been adopted in Connecticut, with “devastating impact,” she told The Epoch Times in a phone call.

In two years, two men who switched their identity to female swept up 15 women’s track championship titles that were previously held by nine girls, she said.

Transgender athletes who undergo sex-change procedures that lower their testosterone levels lose much of the physical advantages of being born male, but research indicates the process takes years and still leaves a number of physical advantages intact.

And that still leaves out those who skip sex change altogether.

In one case in Connecticut, a track athlete competed for several years as male before taking only several weeks to switch to competing as a female, immediately scoring two championship wins with record times.

Transgender individuals say that being perceived as their preferred gender improves their well-being. Surveys show that about 30 percent of youth identifying as transgender attempt suicide (pdf). Those who don’t face bullying or feel discriminated against seem to have a significantly lower, though still high, suicide attempt rate.

Regardless of the sincerity of the athletes about their professed gender, those born male have an unfair advantage, according to Holcomb.

“Frankly, it’s unlawful,” she said, arguing it violates Title IX of the Education Amendments of 1972, which guarantees equal opportunity in education.

The U.S. Department of Education reached the same conclusion in a May 15, 2020, letter saying the Connecticut policy violates girl athletes’ civil rights. This position is one of those likely on the chopping block due to Biden’s order.

Bathrooms, Locker Rooms, and Beyond

The order’s mention of bathroom and locker room access reinvigorates concerns over privacy, and even safety, for youth.

“We have separate spaces for privacy for a reason and school districts have a duty to protect the privacy and the dignity of young women, and that’s completely violated when a biological male is allowed and is given full authorization to access these private spaces,” Holcomb said.

Critics also argue that “inclusive” bathroom and locker room policies encourage criminals to harass women by pretending to be transgender. Incidents underscoring this concern have been reported by the media in recent years (pdf).

“The Biden administration’s order is very broad and will touch not just public schools but also employment, potentially even women’s homeless shelters, and safe spaces from domestic abuse,” Holcomb said.

Biden’s order draws on last year’s Supreme Court decision in Bostock v. Clayton County, which held that the ban on discrimination based on sex in Title VII of the Civil Rights Act of 1964 also covers sexual orientation or gender identity.

The decision came as a surprise to many conservatives as it was penned by Justice Neil Gorsuch, who was nominated by President Donald Trump in 2017 and was generally expected to interpret the law as written.

Yet, the opinion equaled a “judicial dictate” of “judges latching on to a novel form of living literalism to rewrite ordinary meaning and remake American law,” Justice Brett Kavanaugh, another Trump nominee, noted in a dissent.

The decision was explicitly limited to the employment setting and shouldn’t be interpreted to apply in any way to women’s sports, Holcomb said.

But Justice Samuel Alito, in his own dissent, warned that the decision would open the door to inserting sexual orientation and gender identity into legislation banning sex discrimination across the board.

“Under the Court’s decision … transgender persons will be able to argue that they are entitled to use a bathroom or locker room that is reserved for persons of the sex with which they identify, and while the Court does not define what it means by a transgender person, the term may apply to individuals who are ‘gender fluid,’ that is, individuals whose gender identity is mixed or changes over time,” he said.

He noted that “for women who have been victimized by sexual assault or abuse, the experience of seeing an unclothed person with the anatomy of a male in a confined and sensitive location such as a bathroom or locker room can cause serious psychological harm.”

This interpretation of sex discrimination would also intrude on the prerogative for religious institutions to hire employees who “live the faith,” as they’d be compelled by law to “employ individuals whose conduct flouts the tenets of the organization’s faith,” forcing the group “to communicate an objectionable message,” Alito said.

The issue is “perhaps the most acute” for hiring teachers, he said.

“If a religious school teaches that sex outside marriage and sex reassignment procedures are immoral, the message may be lost if the school employs a teacher who is in a same-sex relationship or has undergone or is undergoing sex reassignment.”

The Biden administration seems to be following Alito’s predictions, saying that “under Bostock’s reasoning, laws that prohibit sex discrimination—including Title IX of the Education Amendments of 1972 … the Fair Housing Act, … and section 412 of the Immigration and Nationality Act, … along with their respective implementing regulations—prohibit discrimination on the basis of gender identity or sexual orientation, so long as the laws do not contain sufficient indications to the contrary.”

The Bostock decision makes a core argument that discrimination based on sexual orientation or gender identity “necessarily and intentionally applies sex-based rules.”

In the case of a homosexual employee, “if the employer fires the male employee for no reason other than the fact he is attracted to men, the employer discriminates against him for traits or actions it tolerates in his female colleague,” Gorsuch said.

At least in the eyes of the employer, no, Alito’s reasoning indicates.

“These two employees are not materially identical in every respect but sex,” he said. “On the contrary, they differ in another way that the employer thinks is quite material. And … this is a view that an employer is permitted to implement.”

While sympathetic to the motivation of his colleagues, Kavanaugh argued the court had no business to de facto erase what he described as a well-settled and understood distinction.

“The majority opinion insists that it is not rewriting or updating Title VII, but instead is just humbly reading the text of the statute as written. But that assertion is tough to accept,” he said.

In his conclusion, the justice predicted that “the implications of this Court’s usurpation of the legislative process will likely reverberate in unpredictable ways for years to come.”