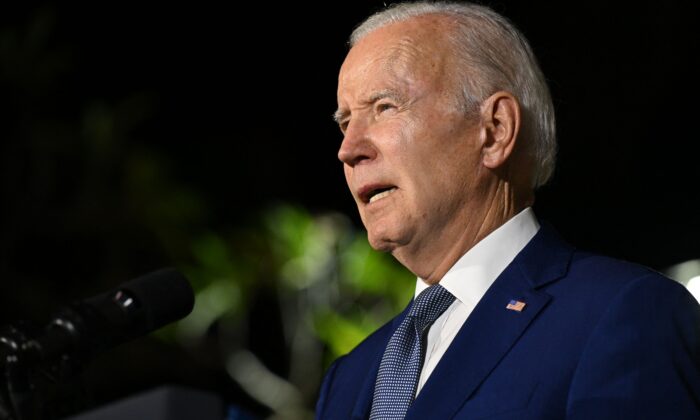 US President Joe Biden holds a press conference on the sidelines of the G20 Summit in Nusa Dua on the Indonesian resort island of Bali, Nov. 14, 2022. (Saul Loeb/AFP via Getty Images)
By Zachary Stieber

“I don’t think there’s enough votes to codify, unless something happens unusual in the House,” Biden said at a press conference while traveling in Asia.

While control of the U.S. House of Representatives is still undetermined because some states have struggled to count votes in a timely manner, Democrats have already lost a number of seats and are likely to be in the minority.

The Supreme Court in June struck down Roe, the 1973 decision that concluded access to abortion was a constitutional right, and an associated ruling called Planned Parenthood v. Casey that also barred states from imposing some restrictions on abortions.

Since then, Biden and other Democrats have repeatedly said they want to approve and sign into law a bill that would not only codify Roe but expand abortion protections beyond what they were with Roe.

The Democrat-controlled House in July passed the measure, although Democrats lacked enough support in the Senate, which had already rejected the legislation.

Sen. Joe Manchin (D-W.Va.), who opposed the legislation because it went further than Roe, joined Republicans in voting against the measure.

Meanwhile, several Republican senators, including Sens. Susan Collins (R-Maine) and Lisa Murkowski (R-Alaska), have sometimes voted for pro-abortion legislation but they voted against the bill earlier this year.

Biden claimed over the summer that Democrats only needed a few more votes in the upper chamber to codify Roe.

“We need two additional pro-choice senators and a pro-choice House to codify Roe as federal law. Your vote can make that a reality,” he said, as he condemned the Supreme Court for its decision that struck down Roe.

“The fastest way to restore Roe is to pass a national law codifying Roe, which I will sign immediately upon its passage at my desk,” he also said.

On Nov. 14, Biden also said that he thought the midterms showed “the strength and resilience of the American democracy” and championed voters largely rejecting candidates who have questioned election results.”