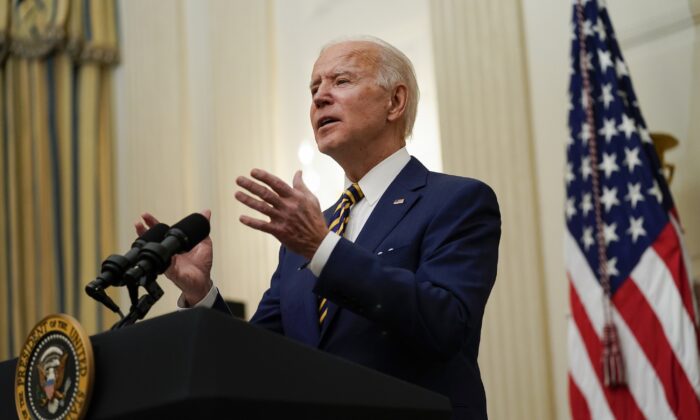 President Joe Biden delivers remarks on the economy in the State Dining Room of the White House in Washington, on Jan. 22, 2021. (Evan Vucci/AP Photo)
AMERICA

Biden: ‘Nothing We Can Do’ to Change Trajectory of COVID-19 Pandemic in Next Months

The U.S. government can’t do anything to change the trajectory of the COVID-19 pandemic in the coming months, President Joe Biden claimed on Friday.

“There’s nothing we can do to change the trajectory of the pandemic in the next several months,” Biden said during a speech at the White House.

COVID-19 is the disease caused by the CCP (Chinese Communist Party) virus, a novel coronavirus. The disease has contributed to the deaths of some 400,000 Americans in the past year, according to federal health data.

Biden’s remark prompted criticism. “Haven’t we been told for months that restrictions and mandates were necessary to change the trajectory of the pandemic in the next several months?” former Rep. Justin Amash (L-Mich.) wrote in a tweet.

Harsh measures were imposed by the majority of governors across the country to try to curb the spread of the CCP virus, leading to crippling job losses and a wave of businesses shutting down.

Biden, speaking a day after he released a national COVID-19 strategy, outlined why he’s pushing for a fresh relief bill. He said a briefing from his economic team showed that the public health crisis caused by COVID-19 “is not getting better; it’s deepening,” citing the latest wave of unemployment filings and the rise in the number of daily new cases.

Justifying his latest slate of executive orders, the Democrat added that a lot of unemployed persons are facing eviction or waiting for hours at food banks. Many people with jobs, meanwhile, are “barely hanging on, and wondering what’s next,” he added.

“While the COVID-19 package that passed in December was a first step, as I said at the time, it’s just a down payment. We need more action, and we need to move fast,” he said.

Biden proposed a $1.9 trillion COVID-19 relief plan last week that features $1,400 checks to those that already got $600 payments from the bill Congress passed last month and an increase in the federal minimum wage to $15 an hour.

As he waits for the new proposal to be considered by Congress, his new orders aim at enacting relief, including ordering the Department of Labor to consider allowing people who left their jobs over “unsafe working conditions” to receive unemployment insurance and asking the Treasury Department to focus on delivering stimulus payments to the millions of households that have yet to claim them.

“Today, I’m signing an executive order that directs a whole-of-government effort to help millions of Americans who are badly hurting. It requires all federal agencies to do what they can do to provide relief to families, small businesses, and communities. And in the days ahead, I expect agencies to act,” Biden said.

“A lot of America is hurting. The virus is surging. We’re 400,000 dead, expected to reach well over 600,000. Families are going hungry. People are at risk of being evicted. Job losses are mounting again. We need to act. No matter how you look at it, we need to act,” he added.

The source for the projected death toll isn’t clear, and the White House didn’t respond to a request for comment. The Institute for Health Metrics and Evaluation, which has repeatedly over projected deaths from COVID-19, estimates the number of deaths reaching 568,806 by May 1.

Biden’s comments came a day after Dr. Anthony Fauci, the president’s medical adviser, told reporters that the number of daily new COVID-19 cases “might actually be plateauing in the sense of turning around.”

“There are always lags, so please be aware of that; that when you have cases, and then a couple of weeks later, you’ll see it represented in hospitalizations, intensive care, and then a couple of weeks later, in deaths,” he added. “So you have almost paradoxical curves, where you see something plateauing and may be coming down at the same time as hospitalizations and deaths might actually be going up.”