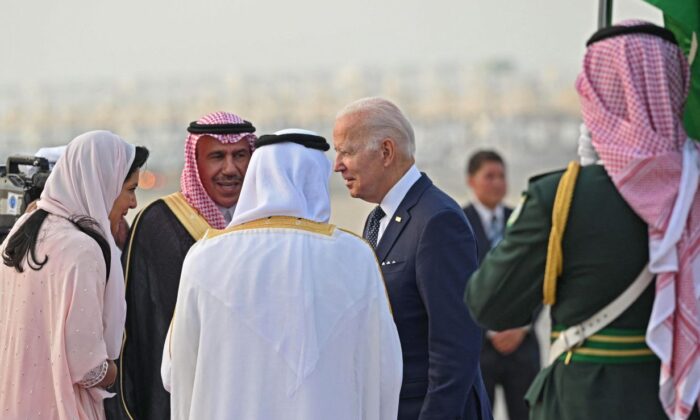 President Joe Biden arrived on July 15 in Saudi Arabia, giving Crown Prince Mohammed bin Salman a fist bump and shaking hands with King Salman, after previously pledging during his presidential campaign to make the kingdom a “pariah” on the world stage.

White House press secretary Karine Jean-Pierre told reporters on July 15 that the trip “follows the monumental decision to open Saudi airspace to all civilian carriers without discrimination, a decision that includes flights to and from Israel.”

Energy and security interests prompted Biden and his aides to decide not to isolate the Gulf oil giant that has been strengthening ties with Russia and China. Biden, who said he would discuss human rights during the visit, was met by Prince Khalid al-Faisal, the governor of Mecca province, which includes the Red Sea city of Jeddah.

When opening statements were completed, several American reporters, including NBC’s Peter Alexander, shouted questions about the death of  Washington Post columnist Jamal Khashoggi at the prince. “Will you apologize to his family?” one shouted to the prince. “Is Saudi Arabia still a pariah?” another asked. Bin Salman didn’t respond as reporters were led from the room.

Biden will discuss energy security with leaders of Gulf oil producers and hopes to see more action by OPEC+ to boost output, but there were unlikely to be any bilateral announcements from the talks, national security adviser Jake Sullivan told reporters en route to Jeddah.

“We believe any further action taken to ensure that there is sufficient energy to protect the health of the global economy, it will be done in the context of OPEC+,” Sullivan said. “We are hopeful that we will see additional actions by OPEC+ in coming weeks.”

He added that Biden will talk about “energy security” with the kingdom’s leadership.

“The president discusses it when he’s in Europe, when he’s in Asia. And he certainly will be discussing here in the Middle East and here in Saudi Arabia,” Sullivan said.

Ahead of the visit to Saudi Arabia, the kingdom announced it would open its airspace to all air carriers, including flights to and from Israel. Biden visited Israel and Palestinian areas this week as part of a broader trip to the Middle East.

The White House said it “welcomes and commends the historic decision by the leadership of Saudi Arabia to open Saudi airspace to all civilian carriers without discrimination.”