Biden Keeps Open Possibility That He Won’t Run in 2024 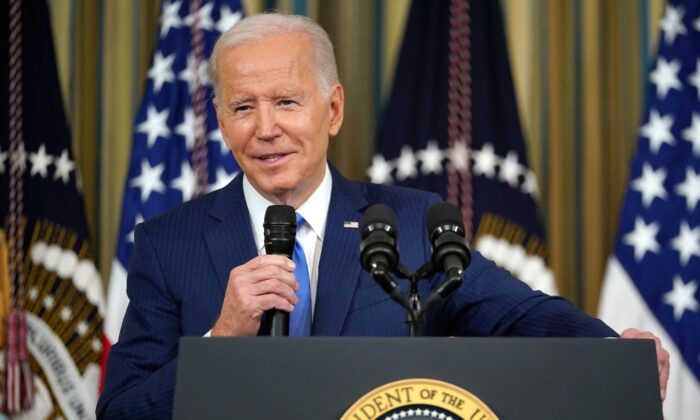 President Joe Biden said on Wednesday that he’ll need to discuss among family members before making a judgment on whether he will seek reelection in 2024, noting that an official call can be expected “early next year.”

“My judgment of running, when I announce—if I annou [sic]—now, my intention is that I run again. But I’m a great respecter of fate. And this is, ultimately, a family decision. I think everybody wants me to run, but they’re go [sic]—we’re going to have discussions about it. And I don’t feel any—any hurry one way or another what—to—to make that judgment today, tomorrow, whenever, no matter what the—my predecessor does,” Biden told reporters at the White House in a post-midterms news conference.

When asked to provide a timeline for when the public could expect an official call from the president on whether he’ll seek a second term, Biden said that he’s taking some time off before making that judgment.

“Well, I—my guess is—I hope Jill and I get a little time to actually sneak away for a week around—between Christmas and Thanksgiving,” he said, adding that “it would be early next year” when a formal announcement can be expected on the matter.

So far, Biden has avoided an official launch of his 2024 campaign. In late October, the president said that it’s his “intention” to run for reelection but he won’t make a final judgment until after the 2022 midterm elections.

At the time, Biden was also asked if his wife, Jill Biden, supports a 2024 run, to which he responded that the first lady thinks what they’re doing “is something very important” and he shouldn’t “walk away from it.”

Already the oldest sitting president in U.S. history, Biden’s upcoming 80th birthday on Nov. 20 has fueled questions about whether he should pursue a second term. Biden’s flagging approval ratings are also not looking good as the commander-in-chief’s rating has remained below 50 percent for more than a year, coming in at just 40 percent in a recent Reuters/Ipsos poll.

Despite these concerns, most Democrats have largely pledged their support for Biden in 2024, although some Democrats have suggested that he would not be the best flag bearer for the party after a politically unpopular first term.

Two-thirds of midterm voters—including 43 percent of Democrats—would prefer that Biden not seek reelection in 2024, according to exit polling conducted by Edison Research. Ninety percent of Republican voters do not think he should run, the poll found.

Although Biden has said it’s his “intention” to run for reelection, the 46th U.S. president would not be the first in American history to decide against running for a second term.

Former President Lyndon B. Johnson, a Democrat challenged by candidates who opposed the Vietnam War, shocked the country by announcing in March 1968 not to run for reelection. Johnson was succeeded by former President Richard Nixon, a Republican who ended direct U.S. involvement in the Vietnam War in January 1973.

“Two years ago, we were a great nation and we will be a great nation again,” Trump said during a campaign rally in Dayton, Ohio on Nov. 7. “The first step to saving America is winning an epic victory for Republicans tomorrow,” referring to the Nov. 8 midterm elections.

Near the end of the event, Trump hinted that he will seek another bid for the White House in 2024.

“I’m going to be making a very big announcement on Tuesday, November 15, at Mar-a-Lago in Palm Beach, Florida,” Trump said, without elaborating. He added, “We want nothing to detract from the importance of tomorrow.”

Trump has been hinting that he will make another run for president for months.

“And now, in order to make our country successful, and safe, and glorious, I will very, very, very, probably do it again, OK?” Trump said at a rally in Iowa on Nov. 3, dropping a strong hint that he would seek reelection.

When Biden was asked who he would rather face in 2024, Trump or Ron DeSantis, the Republican governor of Florida, Biden said, “It’ll be fun watching them take on each other.”

DeSantis won reelection by nearly 20 percentage points on Tuesday, according to projections, putting himself in a strong position to challenge Trump.