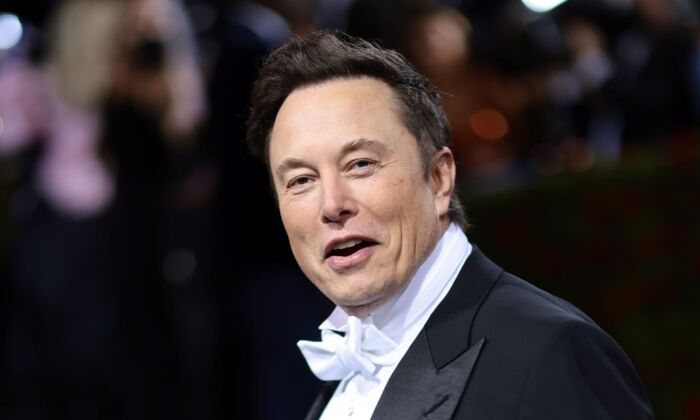 Elon Musk arrives for the 2022 Met Gala at the Metropolitan Museum of Art in New York City, on May 2, 2022. (Angela Weiss /AFP via Getty Images)
By Tom Ozimek

President Joe Biden took a jab at Tesla CEO Elon Musk’s “super bad feeling” about the economy comment when asked about it at a Friday press briefing on the government jobs report, insisting the labor market is in good health and suggesting Musk was out of touch with reality, drawing a reaction from Musk on Twitter.

Biden made the remarks while touting the data from the newly released nonfarm payrolls report, which showed U.S. employers added 390,000 jobs in May, the unemployment rate remaining at an unchanged 3.6 percent, and the labor force participation rate edging up to 62.3 percent.

After concluding his speech by saying his economic plans would produce “the strongest, fastest, most widespread economic recovery America has ever experienced,” Biden was asked by a reporter to comment on Musk saying he had a “super bad feeling” about the U.S. economy, a view that seems to run counter to Biden’s rosy picture.

“So, you know, lots of luck on his trip to the moon,” Biden added.

“Thanks Mr President!” Musk wrote in a tweet, in which he shared an article from NASA that said the space agency had picked SpaceX, a company founded by Musk, to land the next American astronauts on the moon.

The reporter’s question to Biden was prompted by reports earlier in the day that Musk had sent an email to Tesla’s top managers, telling them he had a “super bad feeling” about the economy and that the electric car giant needed to slash employment by around 10 percent.

The email, which was obtained by Reuters, was titled “pause all hiring worldwide.”

The Epoch Times has reached out to Tesla to verify the authenticity of the email but received no response by publication.

The nonfarm payrolls report Biden was discussing showed that May’s job creation numbers were lower than April’s 436,000 gain, though they beat analysts’ forecasts by around 65,000.

“Job growth may slow further in the months ahead, but with nearly 2 open jobs for every unemployed worker, it would take a significant economic slowdown to keep payrolls from continuing to expand,” he added.

While job increases were widespread across various industries, the employment report showed that 61,000 retail jobs were lost in May, with most of the losses coming from general merchandise stores.

This suggests U.S. consumers are shifting their spending priorities away from goods and towards services, with the leisure and hospitality sector seeing the biggest gains, adding 84,000 positions.