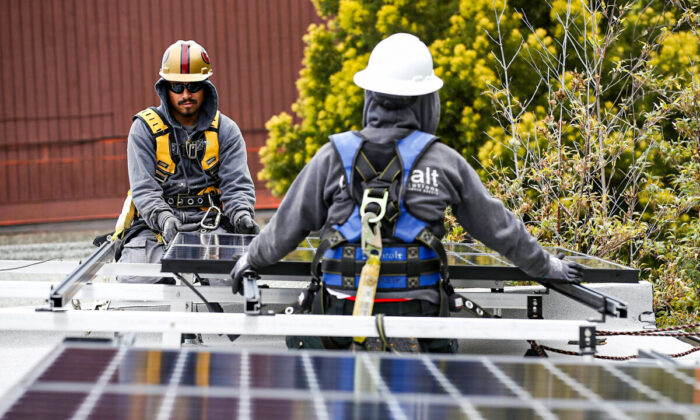 President Joe Biden will authorize the Defense Production Act (DPA) to advance his clean energy and climate change agenda, a senior administration official said during a call with reporters.

According to the White House, the president will approve the use of the DPA to expand domestic output of clean energy technologies, including solar panels, heat pumps, transformers, and equipment for utilizing electricity-generated fuels, such as fuel cells and electrolyzers.

By invoking the DPA, manufacturers of solar panels and other green technologies will receive grants and loans.

In addition, the president will employ federal procurement to support greater U.S. solar manufacturing capacity, which will involve “master supply agreements” and “super preference status.” The former consists of companies accelerating the sale of their products to the federal government, while the latter applies domestic content standards for federal procurement that are “consistent with the Buy American Act.”

In the meantime, Biden will institute a 24-month tariff exemption for solar panels created in Cambodia, Malaysia, Thailand, and Vietnam. Obtaining cells and modules duty-free, according to the senior administration official, will ensure the U.S. maintains access to enough solar modules to satisfy current electricity generation needs.

The administration will take other steps to promote clean energy, including approving more green projects on public lands, bolstering clean energy in cities and rural areas, supporting a diverse solar workforce, and investing in renewable electricity in Puerto Rico.

“The president is signing several executive actions that together will mean that we are building the strength of our clean energy,” the administration official said in a call, adding that the private sector had already committed more than $100 billion in new private capital to produce electric vehicles and batteries domestically.

This is the moment for the United States to deploy its clean energy arsenal with ally nations, “especially in the face of Putin’s war in Ukraine,” the senior administration official said.

“The stakes are high and the president is taking action. And he’s taking action just as he calls on Congress to quickly pass tax cuts and additional investments that will further advance U.S. clean energy manufacturing and deployment,” the source said.

In March, the Department of Commerce announced that it would be investigating whether solar panel parts firms in four Southeast Asian markets were using these companies to circumvent U.S. tariffs slapped on Chinese firms. The purpose behind these anti-dumping duties is to punish China for subsidizing and implementing predatory pricing measures for the past decade.

Cambodia, Malaysia, Thailand, and Vietnam account for about 80 percent of annual solar imports. That’s created a tense situation for the White House as it tries to juggle between advancing the president’s climate agenda and remaining distant from the Commerce Department’s probes.

The president will tap an emergency under Section 318 A of the Tariff Act that allows the Secretary of Commerce to facilitate certain imports and take other action to respond appropriately.

“[It] allows him to recognize emergency circumstances and provide and take action as a result of that,” the senior official said. “He’s using that authority to ensure the reliable supply of solar components from Southeast Asian countries Cambodia, Malaysia, Thailand, and Vietnam, that play a key role in in the reliable supply of this solar as a bridge.”

The industry response has been mixed since reports surfaced that Biden would provide a 24-month tariff suspension.

“The president’s action is a much-needed reprieve from this industry-crushing probe,” said Abigail Ross Hopper, chief executive officer of the Solar Energy Industries Association (SEIA), in a statement. “During the two-year tariff suspension window, the U.S. solar industry can return to rapid deployment while the Defense Production Act helps grow American solar manufacturing.”

Officials note that the White House could reintroduce tariffs on panels imported from these markets once the 24-month period is over. But applying these levies retroactively is not on the table, officials confirm.

Market analysts believe the 24-month pause might not offer enough clarity for the sector since a resolution to the case is more important.

“This approach allows the Biden team to appear to be responsive to repeated requests for intervention. However, the issue may still be challenged in court, and it is unclear on potential impact of tariffs that may be announced on past shipments,” Jeff Osborne, an analyst at Cowen & Co., wrote in a note on June 6.